Mill Hill Chapel sits quietly and unassuming on one side of the very busy City Square in Leeds its stonework darkened by decades of industrial smoke and grime. Set back from the main thoroughfare the chapel is fronted by its war memorial which stands to one side of the main entrance and remembers the fallen from both world wars.  For those who venture inside the chapel, either for or after a service or on a Heritage Open Day, standing proudly on the wall facing you is the chapel Roll of Honour and bears the names of all the chapel men who went to war for King and Country in the second decade of the twentieth century.

Which of the 28 or so men from the War Memorial shall I bring back to life, and who from the 100+ on the Roll of Honour shall I remember?

The congregation must have been proud of the soldiers from their community as on the Roll of Honour they included alongside names any medals that had been awarded.  This includes a Victoria Cross, Military Medals, Distinguished Service Cross, Distinguished Conduct Medals and Croix de Guerre’s.  The War Memorial also includes the rank and regiment of those who fell.  The congregation at the time would have made this information visible to all who passed, with no knowledge that 100 years on this information would give family and military historians a ‘leg up’ with their research.  I for one say thank you to them for their foresight!

Whose name on the War Memorial stands out?  Whose regiment differs from his comrades? Should I choose an officer or someone from the other ranks?……………….. L Fishburn. 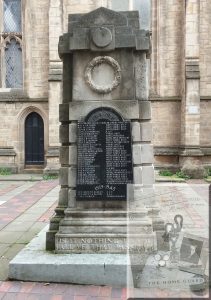 All who passed by the War Memorial at Mill Hill Chapel would have known that L Fishburn died during the Great War, but who was L Fishburn?

According to the Commonwealth War Graves website, there is only one L Fishburn, which is a bonus!  All the information seems to match up with what is already known – Leonard Fishburn, the son of Mr E and Mrs E A Fishburn of Claypit Lane, Leeds. Leonard served in the West Yorkshire Regiment (Prince of Wales’s Own) as Rifleman 267077.  Leonard died on the 17th of February 1917 aged 21 and rests in Ten Tree Alley Cemetery, Puisieux, France along with over 40 other casualties of war.

Leonard enlisted in Leeds joining the 2/th battalion of the regiment.  The medal roll for Leonard clearly tells the reader that he was Killed in Action, while the record card gives the added information of another service number – 4900.  When looking for Leonard in the Army Register of Soldiers’ Effects, it seems there are two records for the same person – both with slightly different information but being cross-referenced by the army, both have the service number of 4900.  Leonard’s mother was to receive all monies owing to him from the Army, the final payment being made in 1919.

Going back to a more peaceful time in Leeds.  Leonard was born on the 20th of December 1893 and was taken to Leeds Parish Church on the 28th of January 1894 by his parents Edward and Elizabeth Ann.  The family at the time lived in Beverley’s (sic) Yard, Kirkgate, Leeds – Edward at the time was a brewer.  Could Beverley’s Yard have a link to Beverley’s Yorkshire Brewery?

No 11 Grove Place, Leeds was home for the family in 1901.  Edward was now aged 43 and still working as a brewer, while Elizabeth was a year younger, aged 42 and was the mother of four children aged between 21 and seven.  The census of 1911 gives more information of use to family historians, namely how long a couple had been married and how many children are alive at the time of the census being taken.  Elizabeth Ann had given birth to six children, with four being alive to be counted, not necessarily being counted in the home of their parents.  Edward, now a shopkeeper,  and Elizabeth Ann were living at 5 Hampshire Terrace, Leeds, with Leonard who was now 17 years old worked as a  tailor (wholesale).  Also in the house was John MacWaters, a 54-year-old widower, who had been married for 33 years,  employed as a bespoke tailor from Dundee, Scotland and Thomas Watson aged 60, who had been married for 35 years and worked as an advertising agent born in Durham.

As we know Leonard rests in Ten Tree Alley Cemetery with the following quotation at the base of his headstone ‘Shall they join the host above wearing their wounds like stars‘. 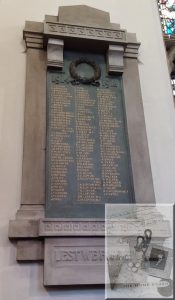 I now must draw your attention to the Roll of Honour where two members of the Hirsch family are included.  Firstly, D P Hirsch who was awarded the Victoria Cross but I want to focus on his younger brother F B Hirsch.

The Hirsch family in 1901 lived at 4 Woodhouse Cliffe, Leeds.  Harry was the head of the household and was a Woollen Shoddy Manufacturer, being born in Dundee. His wife was Edith and mother of 3 children aged between 1 and 11 – David P was 11, Frank B was aged 3 and Marjorie aged 1. The family were looked after by two servants.  Harry and Edith Brindley had been married in the September quarter of Leeds in 1895.

Ten years the brothers were boarders at Woollaston School, Nantwich, Cheshire. Meanwhile, Harry and Edith were living at what could be Parkside, Harehills, Leeds.  Included in the household were Betsey Hirsch, Harry’s 74-year-old mother, Alice Brindley, probably Edith’s sister and three servants – a cook, sewing maid and housemaid.  Life carried on the for the Hirsch family, the boys were having a private education, Harry owned property in Leeds and Dacre. Harrogate.

Frank Brindley Hirsch served as a Major in the Green Howards, the same regiment as his brother – a regiment that is very close to my family. Later being part of the 5th Btn. Durham Light Infantry  Frank survived the war and went on to marry Amy Megson in 1921 in the Cambridge area.  The couple went on to have four children, three of which went on to serve in WW2.

The family lived in Low Hall, Dacre, Harrogate.  Harry was one of the Bradford wool merchants, Hirsch Son and Rhodes.  In Dacre, he was involved in the local community including the Royal British Legion and the local Nidderdale Show. The 1939 Register confirms the family lived at Low Hall, Dacre and also tells that as well as being a farmer, Harry was also a topmaker and Chairman of the West Riding Agricultural Society (?).

Frank Brindley Hirsch can also be found on numerous passenger lists departing and arriving from New York, Boston, Quebec, Montreal – could this be business or pleasure? The Leeds Mercury of 15 December 1933 has the company claiming damages for an alleged breach of contract – Harry was living at King Lane House, Adel, Leeds and Frank was residing at Kent Road, Harrogate. Again during WW2 the company run by the Hirsch family attended Bow Street Court involving the Treasury.

Frank Brindley Hirsch was born on the 1st of March 1898 and died in the Claro District in the September quarter of 1995.