In the 1861 census for Liverpool, there is an entry for a five-year-old boy named Thomas C Greenwood. He is living at the Forge public house, Lime Street, Liverpool with his parents, Joshua T and Catherine, his father is the publican. Thomas was not their only child, he had two younger siblings. All the children had been born in Liverpool, while Joshua was from Lincoln and Catherine was from Wales.

By 1871 Joshua is now a General Agent and Collector and he and his wife had another addition to the family. If you are looking for Thomas C in the census you might find that a bit of a task if using Ancestry as his surname has been transcribed as Greenwald.

While living in Liverpool, Thomas Collingwood Greenwood met a young lady named Margaret Ann Fairclough and on the 25th of December 1875, the couple tied the knot in a ceremony in St Silas Church, Liverpool. Thomas told the minister that he worked as an ‘Agent’, the same as his father. The minister, John Harrison, earned his wage on the 25th of December as there were five weddings that day, well five weddings in that register. The wedding of Thomas Collingwood and Margaret was the second entry in the new Register.

In the following years Thomas Collingwood returned to education and in 1879 was Ordained at Chester Cathedral after studying at St Aidan’s College, Birkenhead and licenced to St Columba’s, Liverpool. His entry in the Clergy List for 1897 confirms him being curate of All Saints’ Rainford, 1879-1881, followed by two years in Blackpool. In 1883, he crosses the border and is at Sowerby Bridge. He then moves to All Souls, Halifax from 1887 to 1891. All Saints Salterhebble is his next parish and during his time there Thomas Collingwood and his family live at 12 Ventnor Terrace, The Heath, Halifax.

While at Rainford he was mentioned in The Ormskirk Advertiser for 22nd September 1881. ‘Presentation to the Rev T C Greenwood, of Rainford. On Thursday evening last the Rev T C Greenwood was presented with an elegantly bound musical album by the Young Men’s Bible Class connected with All Saints’ Church, Rainford, and with a purse of gold containing £22, which had been subscribed for by the parishioners, in consequence of his giving up the curacy of Rainford. The members of the Bible class were entertained by the rev. gentleman and his wife at his house, and Mr G Robinson, in a few well chosen words, presented the album. He said that it had always been a great pleasure for them to meet Mr Greenwood, and he felt sure none would miss him more that the Bible class’. They hoped, however, that his future life would be happy and prosperous. They could assure him that they felt greatly indebted to him for his past services, and they trusted that when he left it would be a kind remembrance of his connection with the Young Men’s Bible Class.

The first page of the album contained the following inscription:- ‘Presented to the Rev. Thomas Collingwood Greenwood by the members of the Young Men’s Bible Class, September 15, 1881, in token of their appreciation of his services to the class as a teacher, and also as a testimony of their good wishes for his future prosperity, together with their prayers that he may long be spared to carry on the good work so ably begun in this parish.’

The newspaper column continues with Thomas Collingwood finding great difficulty in finding the words to convey his thanks and gratitude for the presentation. Mr Robinson then went on to present the gold bag containing £22 on behalf of parishioners and again thanks were prolific from both parties and that they would always have fond memories of times in Rainford.

In 1900 the Greenwood family, Thomas Collingwood, Margaret and six children move a little farther away than they have done since their move from Rainford, this time they move to Wakefield where Thomas Collingwood become the vicar of St Mary’s Church, Primrose Hill. The next census, 1911, gives more information than the previous with the inclusion of length of marriage and number of children. Thomas Collingwood and Margaret had been married 36 years and had eight children in total thankfully all were alive at the time but not all were living at home.

I’d seen examples of Thomas Collingwood’s signature on his marriage entry but with maturity and possibly his position within the community his hand had developed a flourish. A kind signature, one devoid of arrogance. Even his everyday writing seems to be of a man that cares – it is clear, easy to read and thoughtful in its manner.

Thomas Collingwood could still be found at St Mary’s in 1921. The following year life would take a turn for the worst as on the 18th December 1922, just days before her wedding anniversary, Margaret died.

Thomas Collingwood continued his service to the parish of St Mary’s until his death in the vicarage on January 25th 1927 and he rests with his Margaret in Sugar Lane Cemetery. 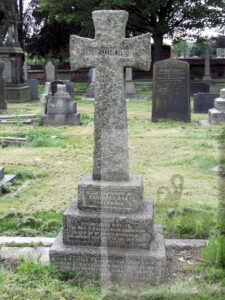 The monument remembering Thomas Collingwood Greenwood and his wife

According to the Yorkshire Post and Leeds Intelligencer dated the 2nd of July 1930 The Bishop of Wakefield, Dr J B Seaton dedicated two memorials in St Mary’s Church. The first was erected to the memory of Thomas Collingwood Greenwood who had been the vicar of the parish for 27 years – he must have enjoyed the area and felt at home there. The second was to Margaret Greenwood. The Greenwood family gave an oak Communion table in remembrance of their parents while parishioners and friends gave a ‘fine’ oak pulpit. As I lived as a child in Hardy Croft, and attended St Andrew’s Sunday School and church, on occasions we went to St Mary’s so I must have seen the Communion table and pulpit. Little did I know that one day I would be telling you all about the vicar who was held in great stead by his family, parishioners and friends.

This year has been a landmark in British history with the Jubilee celebrations but before we say goodbye to Thomas Collingwood and Margaret I would like to tell you about his early years in Wakefield.

Wakefield and West Riding Herald 13 Aug 1904. ‘Monday, the 29th of this month will bring about the jubilee of the consecration of St Mary’s Church, Wakefield and the vicar and Churchwardens are making the necessary arrangements for the celebrating of the jubilee in a manner worthy of the occasion.’ Special services were held and the 110-foot spire was to be examined. Which resulted in it being practically rebuilt. A Mr Thicket, who was regarded as a spire specialist as he had worked on the City Cemetery Chapel previously, was put forward for the task of repairing the 50-year-old spire, which upon examination had tons of dust from the crumbled into the belfry, with some places being no more than a skeleton. The school also needed an amount of work to be done. So an appeal was put in place and fundraisers were organised. All in all the church spire was rebuilt, and the body of the church was repointed. The pews, some of which were uncovered were now furnished throughout with the addition of kneelers. The brass eagle lectern which was tarnished was now lacquered. A new Communion table, coverings and carpets were installed. It was thought that this would mark the 50 years in a suitable fashion. Little did the communion know that in just over two decades there would be a new lectern!

Back to the article ‘The Rev. Thomas Collingwood Greenwood, the present Vicar, who was appointed soon after Mr Parrish’s death, has proved himself an energetic and hard-working clergyman. In fact, he has to be, for having to work the parish single-handed, as he has done for the past twelve months, including Sunday afternoon services at the Chantry-on-the-Bridge, attended to the Workhouse, and the Parochial Mission Room, it is doubtful if a busier clergyman can be found in the city, His loyally supported by his churchwardens and parishioners…The coming jubilee celebration will, we doubt not, mark a new era in the church, educational and social life of St Mary’s.

I wonder what happened to the Greenwood Communion table, the lectern and the two memorials? Lost in the demolition no doubt! Unless someone knows otherwise.