During my stint helping to man a local family history stant at the Ridings Centre during Heritage Weekend a few years ago. I was asked had I seen the family bible on display – no I hadn’t and I’m a sucker for old bibles and books as you never know what secrets or forgotten things you find when turning the pages.

I don’t like lists of names or entries in bibles that are unknown, they should belong now as they did when their name was so tenderly written.  That could be why I’ve taken to transcribing war memorials – a name on a plaque or on a carved stone means nothing unless you know who they were in life.

So who were the Constantine family mentioned in the bible that had been given to the group and was put on display over Heritage Weekend ?

There were names and dates but sadly, no places and in one case just initials.  The names and dates were a start and I copied the names down to try and solve the mystery after tea.  After tea…….no now, while the curiosity juices are flowing…………Tea will wait !!!

The 1881 census filled in a few gaps.  Firstly, the family were not from Wakefield but Wortley or Armley – depending on which census you looked at and that William was a Sanitary Tube maker or worker. The other members of the family stated they were from Armley. Secondly, Nellie was Ellen and thirdly, Ruth could possibly be an Appleby as James Appleby, brother in law, was living in the household along with a Martha Ann aged 9 and giving relationship as niece.

A look on the Freebmd website confirmed the Constantine / Appleby link when William Henry and Ruth Elizabeth (Appleby) married on 31 Aug 1878 in the Leeds Registration District.

But back to William Henry and Ruth Elizabeth in 1881 the family lived at 35 Parsonage View, Armley by 1891 they had moved just down the road to 23 but his employment had changed to that of labourer and all his children attended school except the Wilfred the baby and Elizabeth aged 2.  You may not remember Elizabeth from the list of birth but you may remember Lissey.

By 1901 they were now living at….. well on the census it looked like 13 Bowlingate Terr, but that did not give me a good feeling.  A visit to the Leodis website and search for Bowlingate revealed nothing.  But a manual search of Wortley itself and bingo …. Bowling Garth Terr.  I had a address so why not look at what it was like – no’s 7 – 13 looked to be decent enough houses with steps leading to the front door.  The oval fanlight was surrounded by two stone quadrants with a centre support/decoration.  The windows also had stone decorations above and below.  Partially below ground level was the cellar that looked to have two windows letting in light to what was probably the kitchen.  Back upstairs and there was a large window by the front door.  Upstairs was another large window and a smaller window over the door.  A picture of houses 3 – 5 gives a description of them being back to back, if no 13 an end terrace was back to back I don’t know.

Samuel died on 3 August 1960, Elizabeth – did she marry or didn’t she only the people in the bible know.

William married Louisa Bannister and a search on Freebmd for a Constantine/Bannister child came up with Fred born in 1918 and Annie, she  married J H Marshall on 17 July 1920 in the Bramley District.  Who was J H ?  A look on Freebmd came up with no hits for his marriage but a search of the GRO on Ancestry came up with 50% of the answer – John H Marshall, well it was a start ! Back to Freebmd and a look at their birth transcripts and a possible hit for him of John Hemingway Marshall.

Now, J H and his wife are the people that have the Wakefield link.  John was born in Alverthorpe around 1880 and by 1901 was living with his siblings – his eldest sister, Ethel aged 22 was the head of the house, Elden House, Alverthorpe  and was the ‘parent’ to her other 9 brothers and sisters.  I suppose you could say she was helped by a 22 year old servant.  The previous census told that their parents were Charles H  and Annie S Marshall who lived at Silcoates, Charles being employed as a Mill Manager (woollen cloth).

Back to J H and Annie, they went on to have three children, Reginald b 1921 ; Ruth b 1922 and Harry in 1924 all being registered in Wakefield.  Both John and Annie must have stayed around the Alverthorpe area as Annie died in West Ardsley in the 1970’s

As this was not my family tree I did not want to delve too far back or get too curious as to what else they got up to with their lives but there was one more question I wanted to answer and that was did anyone else have them in their family trees ?  I normally check our Ancestry World Tree but this time just checked them via the trees on Ancestry and a couple of trees came up.  I was pleased that by just checking through the census, Freebmd and the GRO that I had everything they had BUT!!!! I had one thing more than any of them – I had Sarah.

Sarah being born in 1883 had missed the census, simply been and gone and only recorded on her birth and death certificates and in her local parish register when she was christened and buried on 30th June of the same year at St Bartholomew’s, Armley. 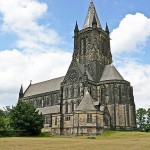 How can she be forgotten, when we all know her name……………….SARAH