A few days after the photographs of Pioneer W Epps medals arrived, three more were attached to another email. 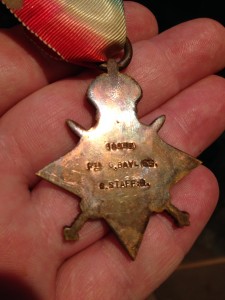 Pte., Bayliss according to the Medal and Award Rolls, embarked on 6th of October 1915.  A search for his Medal Index Card gives his name, with the initial G, as the Commonwealth War Graves Commission information gives.  His Medal Card, however, has his initial with the completion of his name – e o r g e, filled in as a later addition, along with his details for the Victory and British Medals.  George, was also eligible for the 1915 Star.  His rank and regiment are written in red, but written in blue is information that George was promoted to Acting Corporal.

The entry for George in Soldiers who Died in the Great War, tells that he was born in Wolverhampton and enlisted there.

The campaign in Gallipoli, fought by the Commonwealth and French forces, was an attempt to open a supply route to Russia through the Dardanelles and the Black Sea.  The first landings took place in April 1915, with further troops landing in August and being put ashore at Sulva.

George and his comrades  headed for Turkey – George like many other young men never returned.  He was Killed in Action on 1 December 1915 and rests in the Amzak Cemetery, Sulva, Turkey along with over 1,070 other identified casualties and over 680 who are known only unto their God.  Among the unidentified casualties and 114 officers of the 1st/5th Norfolk Regiment, which contained the Sandringham Company, who died on the 2th of August 1915. 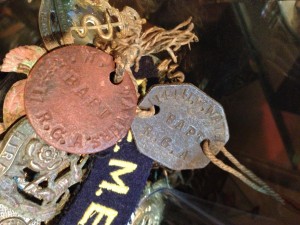 Another image was for a set of identity tags, more than likely still held together with their original string.   So, who are they to identify, incase of injury or death?   Waters, William J, Gunner 114441, R.G.A.  enlisting on the 16th of August 1916.

William obtained the Victory and British Medals, but also had a Silver War Badge, number 415505.  William John Waters, served in the 351 Sge. By. and as a result of being injured or sickness, was discharged from the services on the 2nd of July 1918.  The paperwork for the Silver War Badge (S.W.B.) tells that he served 321 days overseas and that he was 34 years old when discharged.

There is a William John Waters aged 28 in the 1911 census living with his wife Annie (nee Pooley)and son William Edward at 77 Burrard Road, Custom House, Canning Town, Essex.  William gives his birth place of Plaistow and he works as a painters labourer. The couple had married four years earlier.  Whether this is the William whose identity tags are now in a private collection………….well, it could be.  But it nice to write about someone who fought and lived and went home to his family and friends.

The last photograph is for another medal, this time awarded to Dvr. H Curl, 55193, R.F.A.  I think I seem to have left the hardest until last! 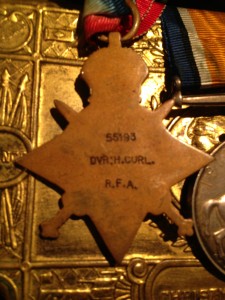 When looking for information on Dvr. Curl, I immediately looked for a medal card, using the information we already knew – his surname and his service number, but nothing came to light.  A change of tact and this time used only his surname, as I did not expect to me 100’s and 100’s of Curl’s.   Scrolling down to the H’s and looking for a man that was  in the R.F.A. – there he was with three service numbers!

If you can’t find the information you would like to add ‘more meat to bones’, try another record.  The Service Medal and Award Rolls, do that, give more information – Henry Charles Curl, Cpl., we now know his middle name.  Also the information about the R.F.A., his serial no. 55193, and Bombardier. We now  find out that he was tfd (transferred) to the R.A.S.C. on 3rd December 1918  and dis. (discharged) on 11th of March 1919.  It looks like that Henry Charles also went home to be reunited with his family and friends.

Thanks to Jason Hewitt for the use of his photographs.