The Mail Online has an article informing its readers of a new database containing the names of 46,000 Brits who received compensation on the abolition of slavery.

The brief article tells of a few household names whose family were in receipt of part of a portion of £20million.  These names include David and Samantha Cameron, Benedict Cumberbatch, Ben Afflick and Ainsley Harriott, whose great-great-great grandfather, James Gordon Harriott, was the descendant of a line of slave owners.

Going back in time, John Gladstone, father of prime minister William Gladstone, owned nine sugar plantations – British Guiana and Jamaica – of which compensation ranged from £2074 to £22443.

In one of my earlier blogs I told you about, Guy Victor Baring, who is the related to Alexander Baring, 1st Baron Ashburton, and other members of the Baring family who are on the database – and if you visit the blog about Guy, you will find he is distantly related to me.  The Baring family of bankers and investors had between them a number of plantations, with the numbers of slaves varying from 9 to over 320.  Their plantation names included:- Fuller’s Rest; Spring Garden; Cotton Tree; Belair and Philadelphia. The Lascelles family of Harewood House, also had property in Barbados and were entitled to money from the fund.

The database is can be found on the Legacies of British Slave-ownership website is a project based at the University College London.  The informative site, has information about the project and a blog – a little sparse in its content, but what is there is interesting.  The search area is well thought out and depending on your research criteria, there are three sections:- Individual’s Details (including name, occupation, religion and more); Address Details and finally, Claim Details (including claim number; Estate; Parish; Claimant Category along with compensation details and number of enslaved).

There are two estates indexed that have over 550 enslaved – John Blackburn, a Glasgow merchant whose estate was in Jamaica and James Henry Mitchell, a gentleman, of Heath House, Oxfordshire, who also had estates in Jamaica.

Recently, I found a link to a fascinating interactive map on Slate.com, who had an article The Atlantic Slave Trade in Two Minutes.  The map in 2 minutes shows 350 years of the slave trade and includes 20,528 voyages, equating to millions of lives.  The map counts up, showing the voyages year by year, ending in 1860.  Some of the years are quite shocking in the number of journeys that took place.  When playing the map, it interesting to see that North America has less voyages than the Caribbean and countries in South America (mainly Brazil). 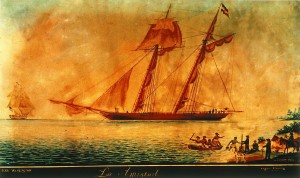 Another site, also with a link found on Slate.com’s site is The Trans-Atlantic Slave Trade Database which list details of 1,000’s of voyages and includes details of ownership, captain and journeys.

Also  on the same site, is the African Names Database lists 1,000’s names, with physical details i.e. height, age, arrival year, where they embarked and disembarked including a link to African Origins.

On Wednesday 15th of July, 2015 on BBC2 at 9pm there is a documentary entitled ‘Britain’s Forgotten Slave Owners’.  Historian David Olusoga will, in the first of two programmes, discover the cost of the abolition of slavery.  The short series will also who who it was that owned slaves, and not always who you would think.  There were many people including: shopkeepers, clergymen and the ordinary 18th century middle class.