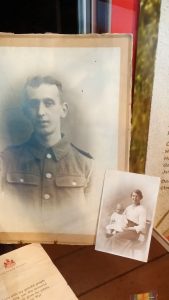 Last year I visited Bagshaw Museum to see History Wardrobe give one of their fantastic talk –  talk is not really the correct word, words like performance and event come to mind but then you have to be part of the audience to understand.

I arrived early, too early for my complimentary drink to be ready, so I had a quick walk around the museum’s ground floor before partaking of my glass of Prosecco. I focused on a cabinet containing photographs and military memorabilia. Photographs are always moving and thought provoking and bring to mind a ‘what if’ or ‘if only’, especially military photographs as you don’t know initially if the young man ‘came home’.

Two photographs caught my attention, one of an officer in a quite elaborate guilt frame and the other, a soldier, unframed and simply mounted on card. What made this special to me was the fact that there was a smaller photograph propped up against one corner and original documents scattered alongside. Without this smattering of documents, the photograph would be just a photograph from someone’s donated collection.

The document that brought this soldier to life was the scroll that accompanied each ‘Death Penny’.

“He whom this scroll commemorates was numbered among
those who at the call of King and Country,
left all that was dear to them, endured hardness, faced danger,

and finally passed out of sight of men by the path of duty
and self-sacrifice, giving up their own lives
that others might live in freedom.
Let those who come after see to it that his name be not forgotten.
Pte. Frank Rothery
Royal Lancaster Regt.

A ‘Death Penny’ also came with a smaller note, one of many identical notes, sent from the King to grieving families across the nation –   ‘I join with my grateful people in sending you this memorial of a brave life given for others in the Great War’.

Well, by the family receiving the Scroll and ‘Death Penny’, we know that his family’s life changed in one fleeting moment when Frank died. But who was Frank before he went to war and before that eventful day.

Frank was the son of John Rothery and his wife Martha Annie nee Wharton. Frank aged 22, married Annie Teale aged 19 on December 18th 1915. Frank worked as a spinner and Annie was a weaver.

Frank being enlisted in Gomersal in 1915. His regiment had been used for home defence before being sent to France. By January 1917 his regiment had become part of the B.E.F. (British Expeditionary Force) landing at Etarples on the 9th inst. He served as Private 4489, in the 8th K.O.R.L. (King’s Own Royal Lancaster) but was transferred on the 10th of January to the 1/4th K.O.R.L.

One damaged form tells that while at Southampton, on the 25th of November 1916 Frank was AWOL, not returning until 12.30pm on the 27th. For this demeanour, he was deducted 6 days pay.

Frank was wounded and died shortly after, according to official documents, on 22nd November 1917. The Commonwealth War Graves Commission has marked his headstone the 25th November 1917.

During the period following Frank’s death, Annie received numerous letters from the War Office, including a receipt for the ‘Death Penny’, and on the 22nd of April Annie signed for ‘his 3 Identity Discs, Letters, Cards, Note book’. Letters and memo’s between the War Office departments had Annie’s address as 65 Highfield House, Whitelea, Batley. Annie was awarded a pension of 20/- per week for her and one child with effect from 8th of July 1918. It makes you wonder how she coped from November 1917 to the mid summer of the following year.

Dear Mrs Rothery, I should have written before this, but have had so many letters to write, that I am only slowly overtaking my correspondence. You have doubtless heard of your husband’s death in action on Nov. 20th (different date). I write to sympathise with you in your very great loss. He was a favourite with his company, both men and officers. He is missed especially by his intimate pals. A good soldier, he died bravely doing his duty, in the cause of righteousness and truth against evil and wrong.

It will be a comfort to you to know that his body was recovered and given Christian burial by a Church of England chaplain. His grave is in the military cemetery in Villiers-Faucon, and he is buried in nice dry soil. A cross will be, if it is not already, set up on his last resting place. 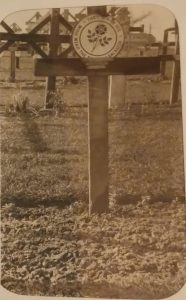 I am a Non-Conformist chaplain, but I thought I should write a note of sympathy, as I am attached to your late husband’s battalion. If you write to the Registrar of Graves B.E.F., you can have a photograph of the grave. I would have written to you sooner but we have been on the move for almost a fortnight, Yours, with deep sympathy’.

It looks like Annie did request a photograph of Frank’s grave as it forms part of his display.

One last receipt received by Annie was for Frank’s Medals – the Victory and British Medals which she signed for on January 10th 1922. But, and there always has to be a ‘but’, Annie was now signing as ‘Annie Grayshon’, yes, she had remarried, marrying John W Grayshon in the September ¼ of 1919 in the Dewsbury Registration District. John had also been a soldier in the Great War. 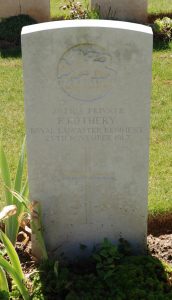 image via Find a Grave

With a photograph giving only one clue, it is amazing how much you learn about their lives.