I don’t know about you, but I thoroughly enjoy a walk around a cemetery. Well, saying that it has to be a nice day. I have, however, been around Sugar Lane on rather wet and windy days. It is not a pleasant experience, especially when copying information and trying to photograph. The writing I can cope with… just – it’s the raindrops on the camera lens that are a tad annoying.

Who is the focus of this walk? It is hard to decide. After looking at over 1,000 photographs, I homed in on a headstone mentioning two unusual surnames – Camidge and Umpleby. Names that you would not find in the top 50 English surnames. Nevertheless, these are the names, but to whom do they belong?

The people named on the headstone would be an ancestor to home in on, whose lives any family historian would find interesting.

Firstly, Charles Joseph Camidge. Born York in 1901 to Matthew Camidge and his wife Mary Ann Shaw. Matthew Camidge (1758-1844) a musician is included in Baker’s Biographical Dictionary of Musicians. Matthew, like his father John, was a musician and composer. Educated at Cambridge, he returned to York. Both Matthew and John originated the York musical festivals – on a small scale beginning with Handel’s Messiah at the Belfry Church. Just for interest, Matthews will is on Ancestry in the Prerogative Court of Canterbury. It is quite hard to read but does cover a few pages.

Back to Charles Joseph in 1861, he was living at the Vicarage, Wakefield with his wife Charlotte. His job, the Vicar of Wakefield. While the Vicar of Wakefield he consulted with Sir Gilbert Scott when in 1857, a report had been completed concerning the condition of the church. It was found that the tower and spire were decaying at an alarming rate and the work should be carried out first. Scott also suggested that if the church was to be re-seated it should be done in oak. Well, we all know what has happened to the seating! With the work completed at a cost of over £20,000, the church was formally re-opened in 1874. Newspapers of the time reported that the restoration included the re-casing of the tower in 1859, the erection of a magnificent spire in 1860. The removal of the galleries and substituting open stalls for large family pews. Several painted glass windows were also included as was a valuable reredos and new heating and lighting systems. Not bad value for £20,000. Can you imagine how much the work would cost now? And would it take longer than 17 years?

I wonder what CJ thought of the opening ceremony?

‘Charles Joseph Camidge, formerly Vicar of Wakefield and Honourary Canon of Ripon Cathedral but late of Leamington, died on the 10th of February 1878 at Leamington’. His Probate continues to tell that it was proven in Birmingham and that Charlotte, his relict was the sole Executrix.

So that’s CJ’s short story. Let me tell you about another name on the large stone darkened by age and industry – Rev. Matthew Camidge. Who is he? Matthew is CJ’s older brother. 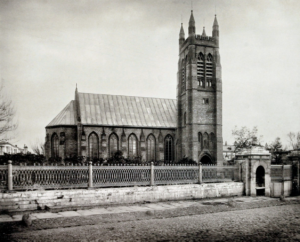 Matthew in 1861 was the incumbent at St John’s Church, Wakefield. Before this, he had been the British Chaplain in Russia to St Andrew’s Church (Moscow). The Chapel established in 1828 replaced a previous chapel burnt in 1812. Matthew had as his congregation both English and Scottish subjects with 200 people regularly attending services. At this time approximately 400 British Subjects were living and working in the City. The date of Matthew returning to the UK is sometime after 1851but before 1861. In the 1851 census, Matthew is in Kimbolton, Nottinghamshire, a visitor in the home of Thomas Charlewood, Vicar of the village. He gave his occupation as Chaplain to British Factory Cons******, Russia.

The next on my list is David Umpleby. Who is he? What connection does he have with the Camidge family to be included?

With a little bit of digging the connection was found. David married Charles Joseph and Matthews sister, Mary Ann or Marianne. The couple married in 1823 at St Michael le Belfry, York. Marianne died in September 1863 aged 71. Researcher beware there are some family trees on Ancestry that have her death year incorrectly recorded.

David Umpleby, only appears in the one census – 1841, as he dies in 1843. When the enumerator walked his round he called on the Umpleby household. Their home was Highfield, Lancaster. Where David like his brother’s in law, was a Clerk in Holy Order, a Vicar. Marianne had two female servants (F.S.) and one male servant (M.S.). also recorded on that night was one 19-year-old Elizabeth Maude and 11-year-old John R Pedder. What their relationship to the Umpleby’s I have not looked any further to find out. 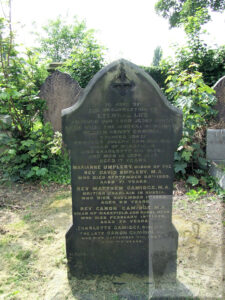 There are other’s named on the headstone which reads

A headstone can tell you a little or a lot. But there is always more to be found.

If you want to hear music from the Camidge family you could always search Youtube.