Private T Harthill, who is a stretcher bearer with the 1st 4th K.O.Y.L.I., writing to the steward of the Normanton Carlton Club (Mr H Fellows), after referring to the death of the four Normanton Territorials, which were reported in last week’s ‘Express’, says:-

“The whole battalion mourns the loss of three more who did not wait to be fetched, but were proud to give all in the cause of right against might.  I hear today that they are calling all single men to the colours, and to my mind it is a disgrace that young men, knowing the critical time the country is passing through, should have to be compelled to take up arms in the defence of Britain’s honour.  I can understand married men with  families not coming forward but not single men, and if conscription comes *** force it not the Government who will be to blame, but these stay-at-homes, who are content to read about the war, or who won’t let it trouble them at all.  I am pleased the club members have responded so well, but I feel sure there are a good number not yet, who ought to be serving.  England expects to-day, just as in Nelson’s day, that this day every man will do his duty, and our confidence in ultimate victory is not shaken in the least, but we must have men to fill the places of those lads who have given their lives for their country’s honour.”

While researching for an ongoing project I have come across a great number of articles related to WW1 and WW2.  The majority of the articles give an insight into how life was at the time of both wars.  The above article from the Wakefield Express issue of 27th of November 1915, tells of the feelings of the fighting soldier who sees war first hand.

We know the thoughts of the soldier and his comrades but who was Private T Hartill, stretcher bearer with the 1st 4th K.O.Y.L.I.’s?  The 1st 4th K.O.Y.L.I. are very close to my heart, as my great uncle served with them, but that is a story to be told later.

My first port of call was the CWGC website to see if a Private T Hartill died during the war, well he was not there, so that seemed to be a bonus – he could still have been entered using a variation of his surname.  But, I had still no idea what the ‘T’ stood for – possibly and more than likely, Thomas, but still holding out on that one for further evidence.

My next step was the Medal Card collection.  I knew he had been in France as he is described as ‘stretcher bearer’, you don’t need those ‘at home’ do you?  A search for ‘T Hartill’ came up with no results, but when just using the surname with variations there was one ‘T Hartill’.  The ‘T’ was for Thomas and he served with the K.O.Y.L.I. and Labour Corps, with the following service numbers- 250419, 478457 and 2330 – if this is our man.   Thomas entered France on 13th of April 1915 – which ties in with the date of the Wakefield Express. One item on the Medal Card was good news – in the remarks section, written in red ink is ‘Dis 6.3.19’, so it looks like Thomas did make it to the end of the war.

Now we have a possible man for the letter writer, there is a chance he could be found in the 1911 census and hopefully with a family.

Here we go!  Thomas Hartill, where do you start with only a name – well I’ve done it before, so why not again.  When was he born?  Where did he live?  Was he a Yorkshire man or had he just enlisted into the K.O.Y.L.I’s?  Starting with ‘Thomas Harthill’ and lived in ‘Yorkshire’, there were six to select from.  Three could be ruled out due to age, bringing the choice down to three. Those three all lived in Yorkshire, as I wanted, but one stood out a little more than the others – he was Thomas Hartill, born in Castleford and living, yes you have guessed, in Normanton…….could that be BINGO! 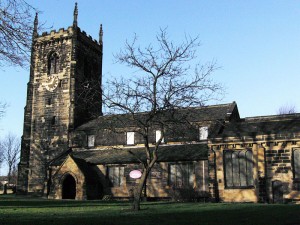 All Saint’s Normanton via Wikipedia

Thomas and his wife, Martha (nee Morris) had been married 9 years in 1911, but had had no children. home for the couple was 34 Foxbridge Row, Normanton Common. The Thomas and Martha had married on the 25th of January 1902 in All Saints Church, Normanton.  At the time of their marriage, Thomas lived at Chapel Row, while Martha’s home was 21 Park Row.  Thomas and Harriet Gregory were witness on that happy day.

Work, what did Thomas do for a living, he was a miner – that also links in with the information in the newspaper.

In 1914 there is a FreeBMD entry  for a death of a Martha Hartill aged 35 and registered in the Wakefield area – could this be Thomas’ wife?  Did Thomas re-marry?

Let me take you a few decades forward in time, to 1939.  There is an entry for a Thomas Hartill living in Normanton.  Thomas is aged 79, which ties in with his year of birth picked out from the census.  He is living with the Holmes family: Walter Holmes, born in 18885, who is Incapacitated; Florence Holmes, born in1889, unpaid Domestic Duties; a closed record; Barbara Holmes, born 1933, at school – Barbara later changed her name to Hardy and finally, Thomas born on 27th of November 1879, classed as single, and working as a Building Labourer.

It looks like Thomas went on to live to see the next war begin – what must he have been thinking.  What memories would have been brought back?