Babies names of the Great War 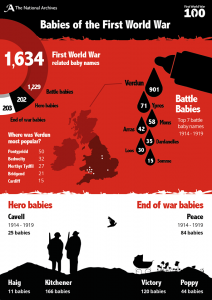 Poster ‘War Babies of the Great War’ via the National Archives

Whilst browsing through a batch of photographs I came across a poster I had saved from the National Archives. The poster was entitled ‘Babies of the First World War’. I would have collected with the thought of using it as a base for a blog…….later. Well, the poster has now found its time to be of us.

The name Verdun was used 901 times and was most popular in South Wales. The battles of Ypres, Mons, Arras, Dardanelles, Loos and Somme were responsible for some children’s names. Why? Was the father involved in the battle? Did he lose his life during a battle, or did a relative or close friend lose his life?

My great uncle was in the battle of Passchendaele which has its centenary coming up shortly. It appears that in the September quarter of 1918 a baby was born and given the name Paschendale, his family name being Holman.

Cambrai also seemed to be used as a first name, this time as early as 1874. Also being used from 1915 to 1933. Dunkirk also seems to have a couple of entries in the first two years of the war.

Calais, another French town is not forgotten, with two births in the late 1890’s, eight births in the Great War period and two during the Second World War. Ostend also seems to have had its fair share of naming. In 1920 the Belgian town of Poperinghe is remembered by the Jones family. Vimy Ridge is not forgotten in the naming stakes and is popular, having its first mention in 1916. With the Moore, Chapman, Banister and Isaac families using this first name.

During WW2 Arnhem is remembered with three births.

Using names of battles or heroes is not a 20th or 21st century idea, as early as 1848 Waterloo was used by the Hatton, Waters and Durrant families to name their children – all boys I presume!

Trying earlier battles and wars, and using ‘Civil’ as a search criterion I came up with it as a  name being used quite a number of times. The earliest entry in civil registration is Civil Reed born in 1837 with the latest entry being 1930. The name has been feminised in some instances to Civilia.

The end of the war was remembered with the use of the name Peace. The name has been used for many years but civil registration has seen one or two children born each year with that name. There are 16 births recorded in the June Qtr of 1856, this coincides with the end of the Crimean War. The numbers fall back to one or two each quarter until the first quarter of 1902 with nine children being given the name, followed by 27 children having Peace as a first or second name – being either male or female. December of 1918 had 28 namings. A steady stream of namings follows in each quarter until the September entries of 1919 when over 45 children have Peace or Peacefull as a first name. The same trend doesn’t follow after the Second World War.

Victory has been used as a first name for many years with at least one or two being recorded in Civil Registration since 1937, with a growing number being registered from 1914 to December of 1918 with over 35 instances. 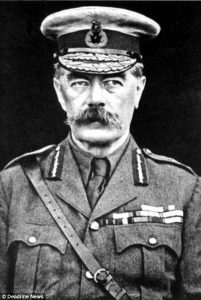 The National Archive poster tells that between 1914 – 1919 the first name Cavell is used 25 times. But omits, as I have found with other names, that the first entry in Civil Registration was Cavel Dickinson in 1844. The next entry in 1854 followed by 1901. The name not being registered again until the December quarter of 1915. During in the war years it was used over 25 times. From 1920 being used at least once or twice each year.

I know the poster is informative but when looking at the poster I was lead to believe that these names were only used from that time, but with a little bit of time spent on FreeBMD I know know that these names have been used from Civil Registration and if I looked at Parish Registers would find that many of the names would go back further.