Extracts from father’s diary of his visit to Germany with Queen Elizabeth Grammar School, Wakefield in the summer of 1931.

Said Auf-Wiedersehen to Father Rhine and boarded the Ostend train. We had a pleasant journey through Aachen and Bruges, with its belfry, to Ostend. Arrived at Ostend, we had a ham-sandwich and arranged a trip to the battlefields for those who wished. Two taxis were chartered. We careered down the straight road flanked by poplars, with cobbles down each side and potholes down the middle; it was late afternoon and everything was beginning to revive after the noon-day heat. Hedges there were none, only ditches and pollard willows. We came to Thourout, the German Headquarters, and now a change began. The trees were young, the farms new built; the mellow red brick gave way to brighter reds, the little old churches to new ones. Then we came to the crest of a ridge with a fine view and a straggling village on the skyline with a church that reminded me of

Shelly Church. About 7.0 o’clock we reached the Tyne Cot Cemetery on Passchendale Ridge. The sun had lost its fierceness and a few small white clouds were high, very high up in the heavens. Nearby a lark deadened the sound of our feet as we walked up the avenues between long white rows of gravestones, prim and even, save where the 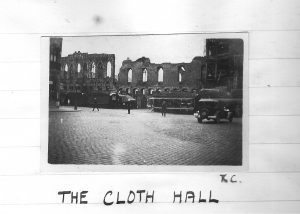 plain wood cross of a fallen foe broke the white line. At the head of the cemetery on a semi-circular wall are the names of the fallen, 3500. Many of the gravestones bear names; many have but the inscription “Known unto God”. It was very peaceful amongst the lavender and rambler roses, so peaceful that war seemed very far away indeed; and above us sang the skylark.

The signs of war have rapidly effaced. New buildings have sprung up. The fields are now corn, the pastures level but for the occasional hollows which are not quite filled in yet. We were at Ypres before we knew it, and entered by the Menin Gate. Here over 50,000 names are recorded of those who fell before the city. The Cloth Hall is still a blackened ruin; it is to remain a perpetual memorial of war. By it are stall with curios to sell and little children asking for centimes. We bought some curious stone covered apparently with clay and gunpowder, with a very effective crack when dropped. Child also bought a very large cigar; he wondered whether customs would pass it, but they never bothered him. From Ypres we bumped along, passing a curious steam-tram (these run on railway lines where the foot-path should be and are uniquely wonderful) until we came to the trenches near Nieuport. The very extreme north section of the trenches is preserved with blasted trees and stagnant pools complete, the guns still jutting from their emplacements. It was eerie and rather awful in the dusk. That was our last stop……..