Another Walk around Sugar Lane Cemetery.

Later in the year on the 30th of June Annie Elizabeth gave birth to their son, John Albert Manton. The summer came and went and autumn began to creep around the corner. One early autumn day John Albert Manton was taken by his parents to the All Saints church in the centre of Wakefield. I wonder how many family and friends joined the couple to celebrate the christening, John’s christening?

John’s name and that of his parents are entered in the Parish Register along with seven other babies and their parents. All but two of those entries were signed by Rev. C E Camidge – remember the Camidge family from the previous Walk Around Sugar Lane? 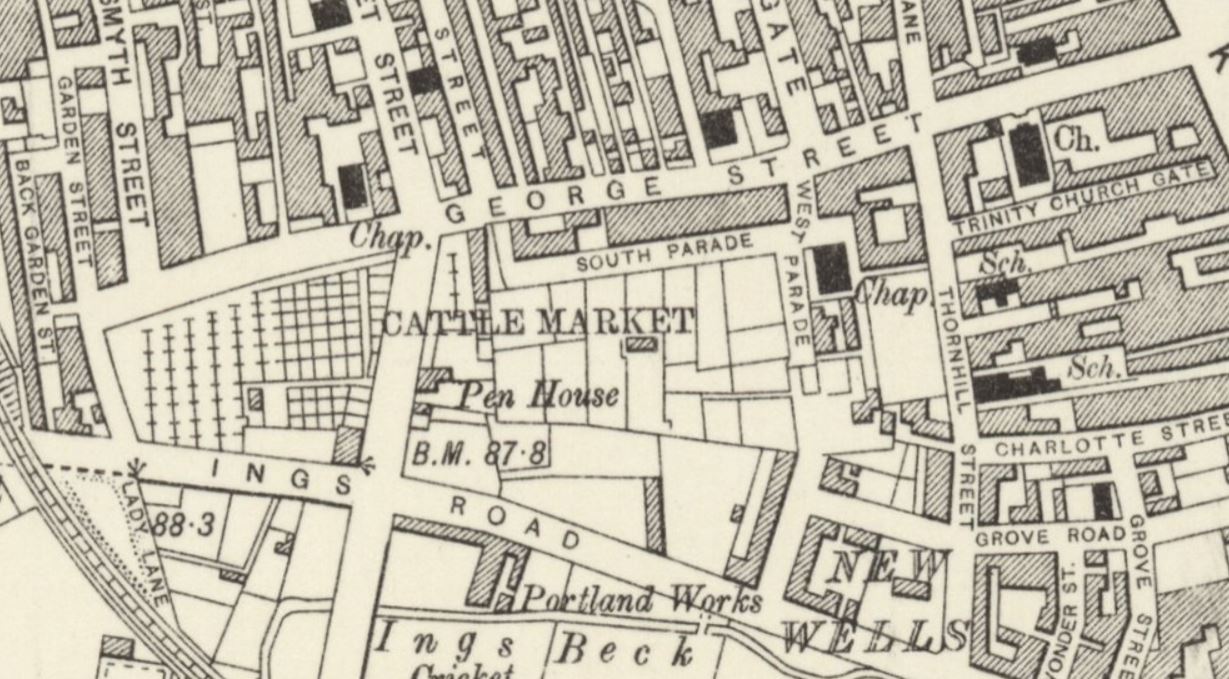 The family now lived on South Parade and Nathaniel worked as a dentist. The family are still living in South Parade at the time the census enumerator walked his round in 1871. By then John Albert had two younger sisters – Constance A aged 5 and Gertrude F(?) aged just two. Also part of the household was Annie Teall, their 22-year-old general servant and Barnsley born, Sarah Heliwell a 20-year-old nurse.

The census enumerator called again in 1881 to the Georgian terrace house. Each of the houses backed on to George Street, while their front door opened directly on to South Parade. Each of the houses had a long garden, accessed across the narrow road. Who is in the house? John Nathaniel, who now classes himself as a dental surgeon. His wife Annie Elizabeth is next, followed by John Albert now aged 16 and a medical student. Constance Annie followed by Gertrude Lilly – her name is now written clearly and in full. Both girls are pupils at the High School – probably, the Girls High School. Again there are two servants – Elizabeth (22) and Annie (19) Wilson.

In early 1889 John Albert Manton and his family were in the Salford area. John was to be married to Ernestine Graham Gradisky. The families gathered at Stowell Memorial Church on the 5th of March 1889. It seems by looking at the corrections to the date, on this and the previous entry, the minister was not sure of the dates. John, now 24 years old was a surgeon, living at Shrewsbury House, Sheffield. While Ernestine, a year older than John, lived at Glen View, 59 Howard Street, Salford. John’s sister Constantine, John N Manton and Charles Gradisky were witnesses.

There is one thing on this entry in the parish registers, that I find fascinating. Ernestine Graham-Gradisky signed in a good hand but, and there is always one of those, in parentheses the minister added a wonderful snippet of information (adopted name). With a quick bit of side-tracking, it seems that Ernestine could have been the daughter of Ann Straker, who later married Charles Gradisky. Ann also appears to have been known as Ann Holt or another question, were there two Ann’s? Anyway, aged 25 she married Charles Bradisky, a Belgian designer. Charles, in turn, was the son of a ‘gentleman’. Where the ‘Graham’ comes into the equation, I have not gone that far as Ernestine is not the main focus of my rambling around Sugar Lane. 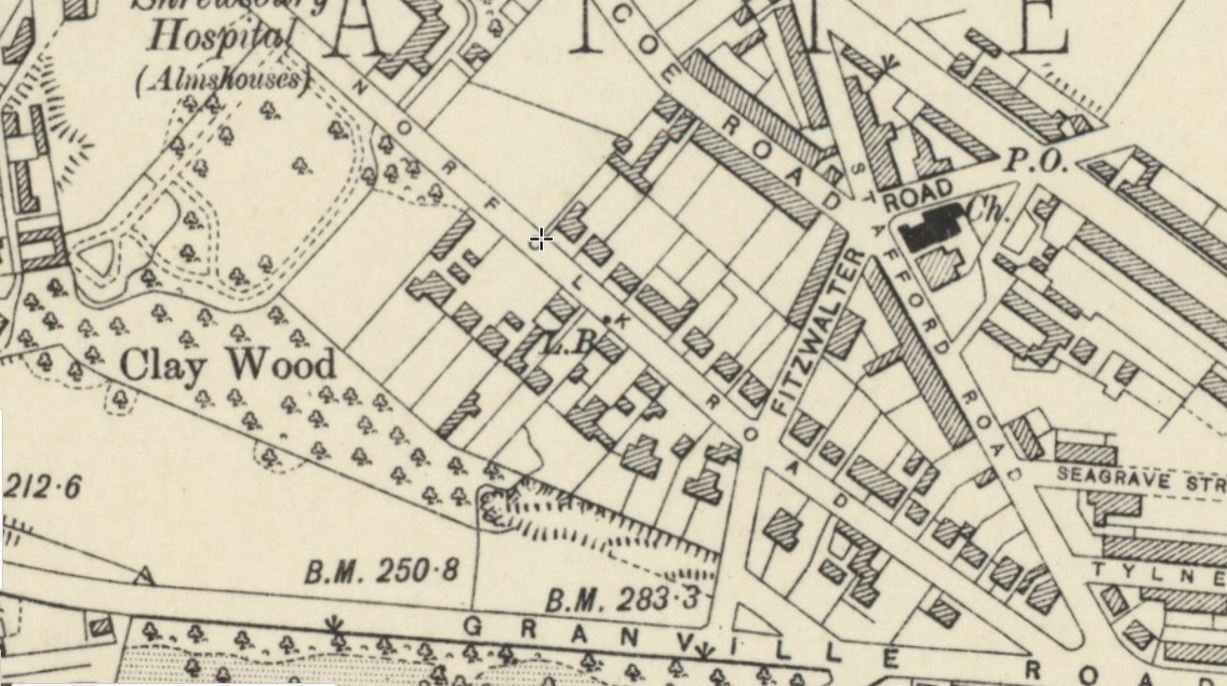 John and Ernestine went on to have three children. Although the family lived in Sheffield, they returned to Wakefield to have their children christened in what is now Wakefield Cathedral.

As well as being a prominent doctor, surgeon and writer of guides and medical works, John was also heavily involved in the local community. The Sheffield Evening Telegraph tells that ‘John Albert Manon, physician and surgeon of 1 Norfolk Road, Sheffield, nominated by William Arthur Birks, John Frederick Hodgson, William Rawson Carter and George Senior’ for the Municipal Elections of 1891. He was nominated for quite a few years and did serve time on the Council’. During this time, John was a member of St Leonard’s Lodge, 2263, part of the Provincial Grand Lodge of Yorkshire West Riding.

John Albert Manton died on the 4th of February 1919. His obituary in the British Medical Journal tells of his full life and explains some of the abbreviations previously mentioned. “Dr, John Albert Manton, a well known Sheffield medical practitioner, died on February 4th from pneumonia following influenza. He was born in Wakefield in 1864, and studied medicine at St. Bartholomews Hospital and at the medical schools of Leeds and the University of Durham, obtaining the M.R.C.S. and L.R.C.P. diplomas in 1886. Two years later he began practice in the Park district of Sheffield. Among other early appointments, he was a demonstrator of anatomy in the Sheffield School of Medicine. For many years Dr. Manton took a prominent part in municipal life as a member of the city council and a guardian. In addition to the work of a large private practice, he held the appointments of medical officer to the Sheffield Post Office and to the Education Department. He spent his holidays in travel, and made good use of his experiences, both on the platform and in various literary contributions. He visited Servia in 1899, and wrote a series of sympathetic articles on life in the Balkans and in recognition of which he was appointed by King Alexander of Serbia a Chevalier of the Order of St. Sava. He was an enthusiastic cyclist, and was for many years president of the Sheffield Road Club, in this was adding year by year to his knowledge of local roads and of the antiquarian lore of the countryside. Dr Manton leaves a widow, a son and two daughters. He was for many years a member of the Sheffield Division of the British Medical Association.”

The Sheffield Daily Telegraph of Saturday 8th of February 1919 adds more information to the life and times of Dr. Manton. “The funeral of Dr John Albert Manton whose death is universally regretted in Sheffield, where he was held in the highest esteem, took place yesterday at Wakefield – his native town. Owing to the fact that the internment was at an early hour of the day, and difficulties of travelling, many old friends of the doctor were unable to attend. The Rev. T. C. Greenwood, Vicar of St Mary’s Church, Wakefield, was the officiating clergyman. The mourners were the immediate relatives, and included Mrs Manton (widow), Captain and Mrs Marcus Manton (son and daughter-in-law), the Misses Manton (daughters), and Mrs James Lowe, of Addison Grange, Sale (sister-in-law). The remains were laid to rest in the family grave. Floral tributes were sent by the widow and daughter, Mr and Mrs Marcus Manton, Mr James Low (sister-in-law), the Brethren of St. Leonard’s Lodge, No. 2263 (“In affectionate remembrance of a beloved Past Master, from the Brethren of St Leonard’s Lodge, No. 2263″), J E B Beaumont, the Staffs of the Sheffield Theatres, Mr and Mrs H Amstein, Mr Reuben Thompson, and Nurse Moore”.

There were quite a few entries for John in the British Newspaper Archive with each article adding more to his very rounded life. As an afterthought, while in the BNA I searched for Ernestine and came up with the following which goes a long way to answering previously asked questions. The Sheffield and Rotherham Independent March 7th 1889 “Marriage of a Local Doctor – At the Stowell Memorial Church, Salford on Tuesday was celebrated the marriage of Mr J Albert Manton, MRCS, LRCP, Shrewsbury House, Park, formerly of Wakefield to Miss Ernestine Graham Gradisky, only daughter of the late Mr J Graham, of Warsaw(?). The bride, who looked charming, in a dress of dark green cloth, “a la Directoire,” was given away by Mr C Gradisky. The nieces of the bride, attired in dresses of white pongee silk, with reseda sashes, the Misses Manton in pink embroidered dresses, a nephew in the costume of “Little Lord Fauntleroy”, and a profusion of choice flowers, with the bright sun streaming in at the window made the ceremony one of the prettiest that has been witnessed in this church for some time”. 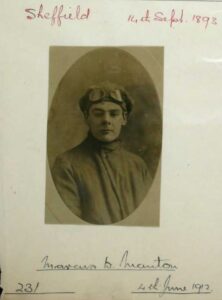 Extra information from the Yorkshire Telegraph and Star June 12 1915 – Marcus Dyce Manton, son of John and Ernestine, was the Godson of Sir Dyce Duckworth, eminent surgeon, physician and dermatologist and physician to King Edward when he was Prince of Wales. “I was at Hendon Flying Ground the other evening, and there saw Mr Marcus Dyce Manton, a godson of Sir Dyce Duckworth, and instructor in flying. He told me how Flight-Lieut. J S Mills, one of the heroes of the week’s Zeppelin-shed attack, had a setback in his flying lessons last winter. In “the swirl “ of another aeroplane the other day – it can only happen on a calm day – he got blown down and hooked on to a railway fence! Now he is famous. Mr Manton taught him to fly.”  Marcus during WW1 was found to be unfit on medical grounds for service.  He, therefore, continued to teach flying and was a key figure in the formation of the British Gliding Association.

I never get tired of saying that you can learn so much from a few names on a headstone with the smallest amount of ‘digging’.