In the past we have made a couple of visits to the New Forest area including Brockenhurst, but earlier this year I spent time walking around the churchyard.  As most who know me will be aware I tend to home in on war memorials and CWGC headstones, so after photographing the CWGC memorials I continued walking around – it is amazing what you can find out on some headstones.

One in particular caught me attention, quite plain from behind and if I had walked the row behind this headstone would have missed its interesting front.  The stone is pale in colour and shaped like a medieval church window but the carving on the top is wonderful.

Who was this headstone remembering and why did they have such an elaborate memorial.  Were they much loved in the area or a character who would be sadly missed by the local people? 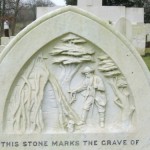 The headstone is to one Harry Mills born around 1840 in Emery Down, Hampshire. In the census of 1861  with his parents Thomas Mills aged 60 a gardener and his wife Ann aged 59.  There are other children including :- Sarah, 22 dressmaker, Lucy 18 ; George 14, scholar and Edward Mills, grandson aged 5.  There is an entry on the 1871 census for a Harry Mills b 1842 in Lyndhurst  with Thomas Mills aged 67 a general labourer and his wife Ann also aged 67 who works as a laundress.  Along with Harry there are 2 other children ; Lucy aged 26 a laundress and Ann who is aged 2 and classed as a daughter (is she the daughter of Thomas and Ann or of Lucy or of another child of Thomas and Ann?) all living at Clay Hill, Lyndhurst.

Harry was later to become well known as a hermit and snake-catcher – eradicating many local areas of their snakes.  He could be seen around the communities with his sack and a forked stick. Harry supplied snakes to London Zoo for their mammals, birds of prey and other snakes.  Harry was also said to have made potions, lotions and ointments from various parts of the snakes to help with rheumatism and boiled snakes to sell the skeletons. It is estimated that during his time as a snake-catcher he caught tens of thousands.

Harry, became a tourist attraction following an article in the national press and many curious tourists and visitors had their photographs taken with him and listed to his tales.

During this period Harry lived in an old charcoal burners hut near Brockenhurst but decided to build himself larger accomodation. The 1891 census has Harry as a single man born in Lyndhurst with his address as  ‘hut at Westly Wood’. One night his hut was vandelised, it was thought this could be to stop Harry claiming squatters rights on the land and claim ownership as he had lived their for so many years.  After his home was destroyed Harry lived in one of the outbuildings at the Railway Inn, Brockenhurst and died shortly after  on 1st July 1905 aged 65 years. 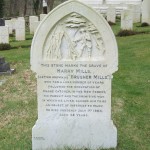 The inscription on the headstone that was paid for by the locals reads:

This stone marks the grave of Harry Mills, (better known as “Brusher Mills”,) who for a long number of years followed the

occupation of  Snake Catcher, in the New Forest. His pursuit and the primitive way in which he lived, caused him to be an object of interest to many.  He died suddenly July 1st 1905, aged 65 years.

After Harry’s death a friend of his, George Waterbridge took ofer the task of snake catching and it is said he inherited the famous sack and forked stick. 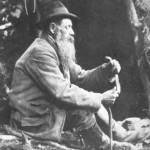 The New Forest today is protected by both the Wildlife Act and local bylaws, so Harry would not be able to live or ply his trade in the forest