Why is it that the things you grow up with, and the people, you take so much for granted, never stopping to ask or question why, what, who and when!

My mum left me her handwritten recipe books from which I am now writing a book with the proceeds going to charity, aunty Dolly also gave me a book, about 7” x 5” and in dark brown mock leather.  As a child I just looked and thought no more about this little insignificant, slightly ragged, or well worn little book.

Before I tell you about the book I would like to tell you about my beloved aunt Dolly. She was born Frances Siddle on 16 September 1907 in Wakefield  to Agnes Siddle.  There was no father named 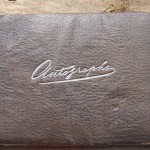 on her birth certificate.  In April 1911 her mother married Ernest Wilkinson and later in the year she was Christened and between 1913 and 1929 three half siblings followed.  By 1950 she had met and married John C Kaye, a professional soldier, now he’s another interesting story.

Frances by now was known as Dolly or Do-Do and in her early 20’s worked as a barmaid in a public house at the Westgate end of Dewsbury Road.  Later, she trained as a nurse and later undertook extra training to become a mental nurse – Frances Siddle, R.C.N., R.M.N. abbreviations of which she was very proud.  In my lifetime aunty Dolly worked at Stanley Royd and was one of the shift Sisters in charge of Ward 18.  She was immaculate in her navy uniform with a starched white apron, starched cap, and when working on the ward she had her cuffs turned up with frilly white covers or when doing her office work she had her sleeves turned down with stiff white cuffs and always had her keys very close at hand.  When I, as a child, used to go with my uncle John to collect her.  We used to drive passed the gate house, where at the end of a shift aunty Dolly or Sister Kaye, would deposit her keys.  Go up the drive and then turn down towards Ward 18 under a small arch and uncle John would wait in the car while I would run to the large door and ring the bell and await the clunking of the key in the door.  Once inside I would either go into aunties office or go and sit with the ladies who lived behind the large locked door.

Aunt Dolly and uncle John became my second set of parents as I lived with them for many months while mum was in hospital with an injured leg – what more can you ask for –  one set of wonderful parents and then two others who dote on you. 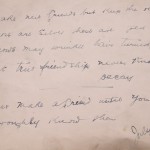 people with the name Siddle. Two of my great uncles have written and signed in the book along with many other peoples ditiities.  My aunts Autograph Book is full of her friends. 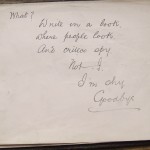 Charles Ernest Siddle on 19 July 1919 wrote ‘What ? Write in a book, where people look, and critics spy, not I, I’m shy, Goodbye’  A few short years later he had died.  His brother Edwin wrote multiple entries but one that makes me smile is this ‘God made the bees, the bees make honey, the infantry fill the sandbags, the R.E’s get the money’. 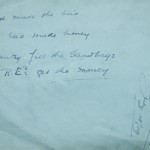 Others who have graced the pages include Nellie Winterbottom who on 22 March 1922 wrote ‘ Mary had a little watch, she swallowed it one day, now she’s taking Epson Salts to pass the time away’.  Gladys Bennett on 6 October 1922 wrote ‘ If every day was sunny, with ne’er a cloud in view, we’d soon be spending money to buy a cloud or two’.  Marjorie Holmes wrote ‘The happiest moments of all my life were in the arms of another man’s wife – my mother’.  M Harrison on 6 October 1922 wrote ‘ The butterfly has wings of gold, the firefly has wings of flame. The flea it as no wings at all, but it gets there just the same’.  I think M Harrison could have also have worked on Ward 18 at Stanley Royd. 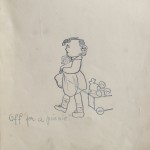 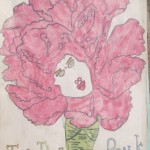 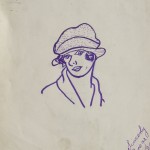 (beautiful pen drawing), M Johnson, Gladys Bennett and finally, G F Smith B.A., L.L.B., L.L.D., A.C.P. who wrote ‘ England has saved herself by her bravery may she now save Europe by her example’.

One of the entries is a poem of sorts and covers three pages entitled The Barnsley Disaster.  At first I thought this was just a story but that proved to be wrong.

Barnsley Public Hall on Saturday 11 January 1908 was the setting for a tragedy when 16 children mainly under 10 years old lost their lives and 40 others were seriously injured. That will be another tale but what interests me at this time are the names.  Family history does after all starts with names.

Ethel Oxley for instance was born in 1908, the daughter of Henry and Ethel Oxley who at the time lived at 19 Pilkington Street, Thornes Lane, Wakefield. Ethel at the time being the youngest of four children.

Gladys Asquith was not a local girl being born in Hereford.  Her grandfather, Benjamin Asquith was a market gardener born in Carr Gate, his wife Elizabeth was also a local girl and their son Walter.  But somewhere along the line they moved to Hereford where Walter met his wife Lily and Gladys was born in 1908 but in the next couple of years they moved back ‘home’ and Evelyn came into the world.  The census of 1911 index gives the impression that Benjamin and Elizabeth are the parents of the two young children, but I think otherwise and am taking Walter and Lily as their parents.  The family lived in a four roomed dwelling at 21 Carter Street, Wakefield.

Mary Murgatroyd – there are two Mary Murgatroyds that are within a decent age range but for some reason, call it gut instinct I am going with the younger of the two as her father was a Law Clerk for the County Council.  As you have previously read one of the entries in the book has legal initials after his name (maybe not a good enough reason but seems to fit better than the other entry).  The family were also living only a few streets away on Johnston Street. 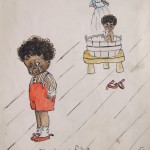 Annie (Ann) Fraser, another writer in aunt Dolly’s little brown book was born in Wakefield along with her brother William, while the rest of the family were from Forfar, Paisley and Glasgow.  Annie’s father James was a boat builder, building seamless steel boats.  The family lived at 12 Caldervale Road, so James would have been very close to work.

Violet (Victoria) Bell was one of five children in the 1911 census to Ernest Edward Bell and his wife Lillian Gertrude – the couple being married thirteen years and he worked as an iron roller at Horbury Junction.  Again, a family that came into Wakefield.  Ernest was born in Louth, his wife in Tipton, Staffordshire  and their two eldest children hailed from Carlisle.  The family lived in three rooms at 14 Wellington St, Thornes Lane.

Nellie Winterburn was the daughter of George and Emma who lived at 3 Wellington Street, Thornes Lane.  George worked as a cloth scourer to feed his family in 1911.

I have now found out who some of the entries were written by but not how they are connected to my aunt – more research to be done. But one of the few names that evade me is G. F. Smith B.A., L.L.B., L.L.D., A.C.P – who is he and what connection did he have to my aunt.  Was the connection her friend whose father was a Law Clerk or what it a nursing connection? 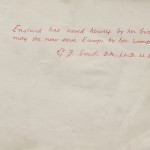 A quick search of the 1911 census has four entries for a Smith who is a solicitor, but none with the initials C. F. There is, unlike other entries, no date for Mr Smith’s entry but going by the others the dates are between 1918 and 1922.

Still more looking around to try and find the threads that crossed these peoples lives in the few years following World War one.  But as I write this something has just dawned on me.  Something I knew, but never thought of.  My aunt was almost a generation older than my father, being born in 1908 and my father in 1923.  I knew all about her but never until today did it click she lived through WW1 – she would have been there when my great grandma received ‘that telegram’ regarding her son Herbert.  There when my great aunt also received ‘that telegram’ regarding her husband George Albert Wheeldon. There when my great grandma lost another son Charles in 1926.  It sometimes takes writing things down to realise how the generations blend into one family.

So that’s the story of Aunt Dolly’s little brown book so far.