I first came across the person above while photographing memorials in St Mary Abbotts church in Kensington.  I homed in on the war memorial outside after spending a wonderful time in Wholefoods – what a fantastic place and their cheese room is to die for!! 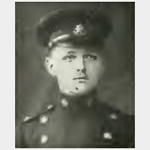 Harold Stanley Frederick Cosens, born 2 December 1889, the son of Frederick George Cosens and Fanny Louisa Ambrose who had married in Kensington in the spring of 1877.

Frederick was a Sherry Shipper born in Streatham in 1855, his wife was born in Marylebone in  the same year.

In the census of 1891 the family were living at 8 Airlie Gardens, Kensington – just off Campden Hill Road. Harold was the youngest of three children.  The family employed three staff, one of which was a nurse.

Ten years later in 1901, Frederick and Fanny still had three children but the number of staff had increased to four.

A further ten years on only one of the children is at home – 24 year old Winifred but now back to three servants.

Harold by the census of 1911 was a Second Lieutenant serving in the East Yorkshire Regiment and was one of 330 men and 80 women at Aldershot Barracks.  We now know he was a career soldier.  But his early had been at St Paul’s School and later Sandhurst Military College.

Harold was Killed In Action at Rue du Bois, Armentierre, on  27 October 1914, according to a number of sources,but the memorial in St Mary Abbots gives the date of 28 October 1914.

The medal card for Harold gives quite a lot of information. Firstly, his regiment and rank was confirmed.  His date of death is given as 27 October.  Other information is taken from Routine Orders, Staff Book, Disembarkation Returns and medals awarded.  In March of 1918 F L G Coens, Esq., applies for the 1914 star in respect of his late son.  Mr Cosens requested the medals address given 7 Observatory Gardens, Campden Hill.  There are a number of notes on the card and one says ‘medals to’ 15 Vicarage Gardens, Kensington.  One other adress is for F G Cosens, Esq., Beech Bough, Bacton, North Walsham, Norfolk.  Harold parents must have moved to Norfolk as he is remembered on the village war  memorial.

His Commanding Officer, Major M Boyle wrote of Harold  “He was my subaltern and I never want a better, always cheery and ready for any work that came in his way, and to take on any hard job, even when out of his turn, as so often happened when I wanted a man I could trust to do any difficult or jumpy piece of work. I could not want for a nicer, more cheery and hard working officer to soldier with……. The exact circumstances are these. He had led his men to retake some trenches from the Germans and had carried out his work successfully, and was actually in the trench, doing a kindly act to one of the enemy, who wanted to surrender, when a sniper shot him from another direction. It is extremely painful to write thus, as it was sheer bad luck! My company are very cut up indeed. He died a gallant gentleman.”