100 years ago the noise, chaos, confusion and panic of life in the trenches of Northern France fell silent, it was Christmas Day! No orders came from on high to stop the fighting for one day, yet peace and calm was the order of the day.  The sound of carols rose from the trenches and gradually men from either side risked their lives to enter ‘no man’s land’ – no shots were fired as they left the safety of the trenches – it was Christmas and all was calm and they played footbal.

Some say the events of that day were fiction, while other deny that and have evidence to prove that the truce and the match took place.  Recently, there was a programme on television that produced the actual football – somehow being brought back home.

It seems appropriate with the football match taking place 100 years ago that I chat about a young man, a footballer who gave his life in the Great War,

By the title of the page you know who I am focusing on today – Walter Tull.  Walter Daniel John Tull was born on April 28 1888, the son of Daniel Tull a carpenter from Barbados and Alice Elizabeth Palmer, who he married in the spring of 1880.  When Walter and his siblings were young Alice died and in the winter of 1896 Daniel married her cousin Clara Alice Susannah Palmer but by the time Walter was 9 years old both his parents had died and he was living in a Methodist orphanage in Bethnal Green.

Clara, remarried in 1899 to a William Charles Beer, in the Dover Registration District and the 1901 census the couple are living in Coldred, Kent, with Elsie Tull and Miriam Tull aged 10 and 3 recorded as step-children. The family next door are the Palmers.  In the census of 1911 has the couple living in Kearnsey(?) also in the household is Miriam Victoria Alice Tull, step daughter, aged 13 and a William Thomas Palmer a boarder aged 64. 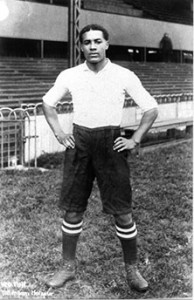 His brother was eventually adopted, while Walter remained and played football for the orphanage football team.  By 1908 he was playing for Clapham F C and within months had won winners’ medals in various leagues.  The Football Star in 1909 called him ‘the catch of the season’. The following year, 1909 he signed as a professional player with Tottenham Hotspur – it was while playing with Tottenham that he experienced racism from the spectators, one correspondent commented ‘a section of the spectators made a cowardly attack on him in language lower than Billingsgate’  he continued ‘Let me tell those Bristol hooligans that Tull is so clean in mind and method as to be a model for all white men to play football whether they be amateur or professional.  In point of ability, it not actual achievement, Tull was the best forward on the field’. 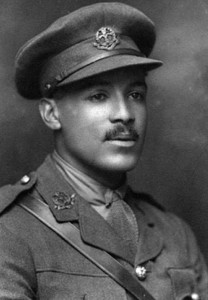 In the latter part of 1911 he moved to Northampton Town where he played half-back and scored 9 goals in 110 appearances.  When in 1914, the war started, Walter was the first player to sign up and join the 17th (1st Football) Battalion of the Middlesex Regiment and by late 1915 he was in France.  It was not long before the military took advantage of Walter’s leadership qualities and he was promoted to sergeant.  Walter took part in the Battle of the Somme in 1916 but in the winter of the same year he returned to England due to illness – sources differ with trench fever and/or shell shock’ being the cause. 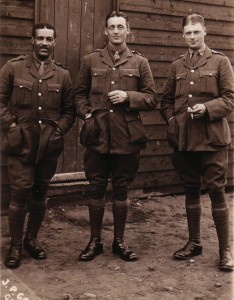 On his recovery Walter was not returned to the front, as many others were, he was sent to the officer training school at Gailes, Scotland.  Even though regulations were against a man of walters birth becoming an officer, he did receive his commission in May of 1917, thus Walter became the first black combat officer in the British Army.  He was posted to the Italian front, being mentioned in dispatches for his gallantry and coolness under fire.

By early 1918 Walter was now serving on the Western Front.  On March 25th he was ordered to lead his men on at attack on German trenches at Favreuil, where shortly after entering No Mans Lane he was hit by an enemy bullet.  He was a highly regarded officer and some of his men made an attempt to bring him back to the British lines. One of the rescuing soldiers told that Walter was killed immediately with a bullet through his head.  And so it was that Walter who had been the first in many fields ended his life on 25 March 1918 aged 29.

Walter Tull had been recommended for the Military Cross, The award was never granted and various campaigns have been hoping that someday 2nd Lieutenant Walter Tull’s family will receive his Military Cross.

Back to Walter, as his body was never found and he is remembered on the Arras Memorial, bay 7.

It may not be the Military Cross, but the Royal Mint announced earlier in 2014 that Walter will be remembered one of a set of £5 coins commemorating the centenary of World War One.