A very warm welcome to my first guest blogger, with some further information on Walter Hamilton RIACH and his family.

I was intrigued to see the recent blog concerning the background research on Walter Hamilton Riach, as I have been looking into him myself, as he and my father were cousins. If it is of interest to anyone, I may be able to add a little more to his and his family’s background.

Walter Hamilton Riach’s (WHR) mother was Mildred Agnes Riach nee Baker, (sister of Eveline Maude Baker (EMB), my paternal grandmother) who had indeed married Lt. Col (RE) Arthur Dundas Riach on June 3rd in Newton Abbott, Devon. WHR was born June 24th 1897, and as noted previously, joined the Queens Own Cameron Highlanders where he was Capt., 5th Bn, was captured in France and died of his wounds shortly before his 21st birthday – like so many of his generation! – on May 5th 1918; he is buried in Le Cateau Military Cemetery. In his earlier days he had been at school near Newton Abbott – Newton College, now no longer – where his brother and a number of his relatives were sent from India, including my father, Eric Robert Oxlade, his cousin, who was one year younger than WHR. He had then gone on to Haileybury Imperial Service College where he had been one of the first group of 23 pupils to join the College, which opened in 1912; 12 of his group of 23 were killed in the first war alone!

WHR had three siblings, two younger brothers, Lt Col. Robert Malcolm Riach, DSO, OBE, (RMR) born July 24th 1900, died Nov 7th 1962, who also joined the Cameron Highlanders and Lt. (RE) Wilfred Knight Riach, (WKR) born 8th August 1907, died 4th February 1928 while at RMQ Woolwich. WKR is buried at the Fort Pitt Military Cemetery in Kent, see photo below; how and why he died there, I have not been able to find out as yet. WHR also had a sister Margaret Stewart Riach, (MSR) born Jan 27th 1902. In 1911 the two younger Riachs (MSR and WKR) were listed in the census that year as staying with their mother and my grandfather Henry John Wilson Oxlade (their Uncle) at his house in Colliers Down, Caterham.

WHR’s mother Mildred Agnes RIACH nee Baker (usually known as “Agnes”) was born on 22nd Sept 1876, and died 14th June 1953; she was buried 18th June in St Peters Church, Yateley, Hampshire; her grave is located close to a tree behind the building attached to the back of the church, see photo below. While in England she seems to have lived most of the time in Cornwall, where exactly I don’t know, but letters from her father confirm that she was there and when her husband Arthur Hamilton Dundas Riach was in England on home leave, that is where they lived, although at various times her husband gave his address as 30, Mattock Lane, Ealing. 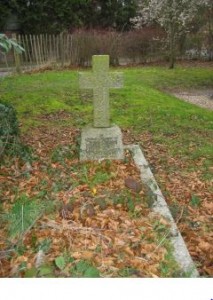 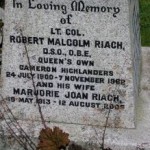 WHR’s younger brother, Lt Col. Robert Malcolm Riach (“Malcolm”), DSO, O.B.E., was born on July 24th 1900 and died on 7th Nov 1962. Also of the Cameron Highlanders like his older brother, Malcolm married in 1939 Marjorie Joan Howarth. His DSO was awarded in July 1940. RMR and his wife are buried at the Colvend Parish church in Dumfries and Galloway.

An interesting reference to RMR’s military career (and mentioning others of his family) is this extract from the description of an auction sale of various militaria:   ‘Robert Malcolm Riach enlisted on the 18th December in 1919 and was appointed as 2nd Lieutenant at Aldershot and the following year moved with the 2nd Bn to Ireland where he was wounded during the SInn feinn operations. He transferred to the 1st Bn in 1925 and served in India and Burma until 1929 when he was seconded to the 1st Nigerian Regiment until 1934 when he re-joined the 2nd Bn proceeding to Palestine the following year. He was transferred back to the 1st in 1935 and later completed a tour of duty at Cameron Barracks until the outbreak of war when he rejoined the 1st Bn. Embarking with the Bn for France he commanded “A” Company with distinction and was one of the survivors at Dunkirk. Awarded the D.S.O. (LG 11/2/ 1940). Commanded 2nd Bn Liverpool Scottish in May 1941 Awarded MID 29 April 1941 Awarded MID 10 May 1945 Awarded O.B.E. 24th Jan 1946. Commanded 4/5th Bn in 1947 until his retirement in 1950 as Lieutenant Colonel. 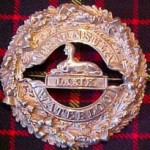 BUT……take a good look at this lovely brooch and note that this is the pre 1881 version with the letters “LXX1X” beneath the sphinx. The Riach family have given great service to 4 their Regiment and to their Country. Now then, just who first owned this glorious brooch? It was made before 1881 so my guess is that perhaps RMR’s Great great Grand father might be a contender’.

Robert Malcolm RIACH’s engagement – and subsequent disengagement – seems to have been a matter of public record as well, his fiancée Dorothy Spicer being described as “one of England’s most beautiful airwomen” :  (From the Sydney Herald in August 1934: nla.gov.au/nla.newsarticle17103972; see also the Straits Times 30th July 1934 page 15 for a longer and slightly more colourful version)

Women’s Air-Taxi Business. There is only one air-taxi business in England, and it is conducted at Hunstanton, Norfolk, by two women, Miss Dorothy Spicer, the first woman to gain the Air Ministry’s B certificate for ground engineers, and her partner, Miss Pauline Gower, daughter of Sir Robert Gower, M.P., the second woman in England to obtain the Air Ministry’s B pilot certificate. Miss Spicer is young and very attractive, and became engaged some time ago to Captain Robert Malcolm Riach, of the Queen’s Own Cameron Highlanders, who has just arrived home from serving in Africa, naturally desirous of claiming his bride. But Miss Spicer has broken off her engagement. So the three-seater Moth of the Spicer-Gower partnership, the former as mechanic and the latter as pilot, is still available for passengers. 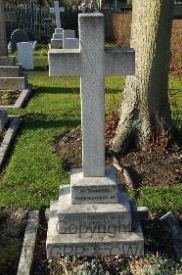 As mentioned above, WHR’s younger brother Wilfred Knight Riach died while at RMQ, and is buried at Fort Pitt Cemetery in Kent.

Hopefully the above will fill in some more details for anyone looking for background on this branch of the Riach family!

The original blog about Walter Hamilton Riach can be found here

If you have any further information on this family, or your family tree also ties in with these people, please let me know / Carol