Years ago my husband and I was on an afternoon jaunt while on holiday in France and we happened upon the work in progress that was to become Fromelles Commonwealth War Graves Commission cemetery. Luckily there was someone walking about, he happened to be a very nice man who was one of the people in charge – don’t you love moments like that? Anyway, he told us a bit about what was going on and when the cemetery would be opened, but in the meantime we took interest in the information boards that had been put in place to inform visitors and passers by what had happened and what was happening.

In 2010 we visited Fromelle again, which just so happened was shortly after the cemetery had been officially opened, as the wreaths and wooden crosses filled the base of the Cross of Remembrance and were still pristine condition. While the fresh flowers and leaves that had been left at the graves of individuals were no longer fresh and vibrant in colour, they did show that someone had been and paid a visit.

Before I focus on one of the men remembered here, let me take you back in time……..

The Battle of Fromelles took place on the 19th -20th of July 1916 and was supposed to be a diversionary tactic, aimed at keeping the German reserves from joining the Somme battle, some 80 km away. Early on the 19th two divisions that had recently arrived on the Western Front, the 5th Australian and British 61st (South Midland)  attacked a strongly held section of the German front line.  The defenders were warned and ready for the allied attack.  Days before the attack a heavy bombardment had poured down the German lines, this was hugely ineffective.

Hours before the attack was due to start the bombardment intensified. The enemy retaliated pounding the waiting British and Australians who were packed into to their trenches. At 6pm the assault began, advancing in waves. The allied were cut down by machinegun fire with the survivors being forced back to their trenches.

The next morning when the assault was called off the Australians had lost over 5,500 men killed, wounded and missing, the heaviest losses for one assault in Australian history.  The British casualties numbed over 1,540.  These figures amount to over one third of the men who fought in the battle.

In May 2008, six mass graves were accounted for and the CWGC were given the task by the Australian Government of overseeing the recovery and to create a new resting place for them. The bodies of 250 men were removed by a team of specialists who took DNA samples in the hope of trying to give these men back their names.  By the time the cemetery was complete all but one of these men had been identified.

In January and February of 2010 all but one of the men had been buried with full military honours.  The last soldier was to be laid to his final rest during the service to dedicate the cemetery on the 19th of July 2010 – the 94th anniversary of the Battle.

The cemetery, the first CWGC cemetery since the 1960’s and was designed to be more of a garden than cemetery, well I think it is a very calm and peaceful place.  A place befitting those who rest there.

Talking about resting there.  Who does rest within the walls of Fromelles Pheasant Wood Cemetery? 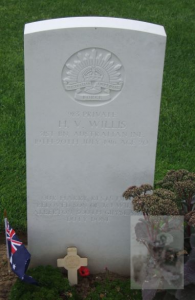 A few of the headstones had tokens placed at their bases. One headstone that had had a visitor was that of Henry Victor Willis, known as Harry to his friends and family.

The Attestation Papers for Australian and New Zealand soldiers are available via the National Archives of Australia and the records for Henry or Harry are there, all 36 pages of them.  Harry was born in Alberton and at the time of his attestation was employed as a farm labourer.  His mother Janet was given as his next of kin.

Harry, serving as 983 in the 31st Btn. Australian Infantry, enlisted on the 14th of July 1915 was 19 years old 10 months, 5′ 4¾” tall, weighed 155lb and had a fully expanded chest of 39″. He had a sallow complexion, blue eyes, brown hair and gave his religion as Presbyterian.  He had four vaccination marks on his left arm and had a mole on his left shoulder blade.

When going through his paperwork one entry tells that he was appointed Lance Corporal in March of 1916 but by May of the same year had reverted to Private, two months later he is one of many reported missing, amended to ‘now reported Killed in Action’.

A typed note dated 4th November 1916  tells ‘German List received by Wounded and Missing Enquiry Bureau, Australian Branch – Identification marks found on the Prisoner of War are inspected by the General War Bureau, and show in the list as under – DEAD.  Another note from 4th February 1917 reads: ‘Admin. Headquarters War Office Letter 21/1396 Accounts 4 – Identification disc received from Germany. No particulars were afforded except that soldier is deceased.  To be reported Killed in Action.’

On the 28th of October 1921 Janet Willis signed a receipt slip acknowledging receipt of Private 983, H W Willis’s Memorial Scroll and King’s Message, later in the year Janet signed again for the British War Medal, this time a witness was required so Marion Lang signed below Janet’s signature. The signing of receipts continued through 1922 and 1923.

Many of the papers in Harry’s file are out of date order.  One such letter is to Mrs Janet Willis saying that no letter had been received from Mrs Willis, but an account of Harry’s fate could be in a report.  The next piece of paper, tells all.

re Pte H V Willis, No. 983 31st Battn.
Private H  I Rogers, No. 1560, 31st Battn, has stated that on July 19th 1916 at Fleurbaix, Willis was shot through the jaw.  He was in the same Machine Gun Section as informant, but they were not together at that moment.  He thinks that Pte. Ellis (nicknamed Paddy) is likely to know particulars.  Ellis’ address is at present as under ‘8 Training Battn. A I F, Larkhill, Salisbury Plains.
Private A E Hickson, No 872, 31st Battn. states :- ‘ I knew Willis. He was in the same tent as myself.  He was a stout fair man about 21 years of age. He came from Yarran, Queensland, Victoria.  He was killed at Fleurbaix in ‘No man’s land’ I saw his body 13 hours later lying dead.  We had to retire and leave our dead there’
We have also to report that this soldier’s name appeared in the German death list dated 4th November 1916.
(Sgd) Beacham Kiddle.

One of the final letters, well not a letter, more like a quick note on a torn off sheet of lined paper, tells that Janet Willis, was ‘quite agreeable that my son may enlist for active service abroad’. That note was dated the 10th of July 1915 – just over a year later he would be lying in no man’s land with his fellow men.