Continuing from the previous entry, is another article from the Wakefield Express. In fact it is the article directly above Pte Webster’s entry in the paper.

Wakefield Express 19th October 1918
Sergeant Harry Beetham of the Essex Regiment has been killed in action in France. He belonged to Ossett and his widow lives at his parents’ home in Horbury Road. At the outbreak of war Sgt. Beetham was in the Territorial Battalion, and went out to France with his comrades. On his time expiring, he took his discharge, but after about a year at home he re-enlisted into the Army, that being in May 1917. His civilian occupation he was that of a fireman at a mill, and he worked at Dewsbury.

More about Harry and his live before his enlistment.  He was the son of Joseph and Clara Beetham who in 1901 were living at Manor Road, Ossett.  Joseph was an Ossett born man who worked as a painter, while his wife it seems was a Londoner. At the time of this census Joseph and Clara had three children – Harry aged 8, Rose Cordelia aged 6 and Bertha aged 2.

Ten years later, home for the family was 49 Manor Road, South Ossett – could this be the same address as in the previous census with the house number omitted? The 1911 census is a wonderful source and I praise the person who wanted the number of years married and the children included, even though more often than not, the person who completes the form gets it all wrong.  With these questions in mind, Joseph and Clara had been married 20 years and Clara had given birth to five children, with only three surviving to be included on the census sheet.  Joseph was still a painter, but now specified he was a house painter, Harry, was still a mill hand. Rose Cordelia, now included as Rosie was working as a rag sorter.

In the newspaper article, Harry enlisted, serving in the Territorial Battalion, his time being complete in 1916. There is a Medal Card for a Harry Beetham serving in the Y.L.I., could this be his.  Early the following year he married Edith Ellis in the Parish Church, Ossett, when Rose Cordelia Beetham and Willie Firth had been witnesses. The couple would bid a fond farewell to each other later that year when Harry re-enlisted in May. 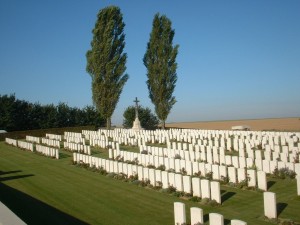 Harry on his re-enlistment served in the Essex Regiment as Lance Sergeant 50006 and by the 21st of September the following year, 1918 he had been killed in action.  He rests in Unicorn Cemetery, Vendhuile, about 24 km south-east of Peronne. The cemetery is surrounded by trees and fields and is the final resting place for nearly 600 identified casualties.

monies owed from the War Department – the monies being finally signed off on August of 1919.

Talking about money, Harry is recorded in the Probate Calendars for 1919, ‘Beetham Harry of 38 East View Horbury Road Ossett Yorkshire a lance-sergeant in the Essex regiment died 21 September 1918 in france Administration Wakefield 10 February to Edith Beetham widow.  Effects £26 17s 3d. It seems strange to read but the calendars are not punctuated.

Harry, as well as being next to Ernest Webster in the Wakefield Express, he is also on the same war memorial, Wesley Street Burial Ground. Ernest can be found by clicking the link on the left at the bottom of the page or following Ernest’s link above.