A Brave Barnsley Woman in the First World War

While researching Bernard Jaques Joyner for my book, Great Sacrifice: the Old Boys of Barnsley Holgate Grammar School in the First World War (Helion and Company 2016), I was very impressed by the talents, bravery and generosity of his oldest sister Amy. I had not realised before that entertainment was provided for troops overseas during the First World War as well as providing distractions for the wounded at home and raising funds to provide comforts for men at the front. 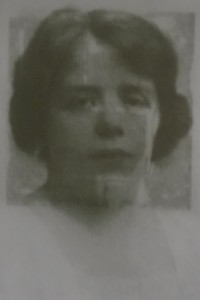 Amy Amelia Joyner was born in 1880 in Barnsley, the oldest of five surviving children of Henry Joyner, Coal Miner, and Eliza nee Jaques, owner of a general dealer shop. Amy qualified as a ‘Professor of Singing’ at the age of 20, after studying at the Royal Academy of Music in London. She married Archibald William Jarman, Colliery Clerk, in 1906 and they lived at 57 Hopwood Street, Barnsley. The family headstone in St John the Baptist’s Churchyard in Cudworth tells the tragic story of their only two children, who both died very young: Irene Hope not quite 5 years and Charles less than one day. Amy had already experienced a great deal of death in her family with the loss of her father and five younger siblings by 1900.

A soprano ‘vocalist’ known professionally as ‘Madame Joyner’, Amy organized and participated in concerts throughout the war period. The first concert in September 1914 raised nearly £70 for the main Barnsley Patriotic Fund and when war ended she started fundraising for St Dunstan’s Home for Blind Soldiers. Amy went out to France for five weeks in summer 1917, despite or perhaps because of knowing first hand the danger involved at the front. She was with a group of vocalists who risked their own lives to entertain the men at the front in a series of concerts. 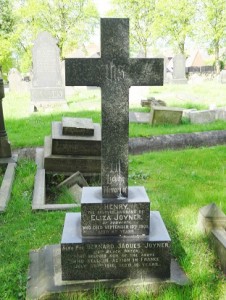 Her youngest brother Bernard was killed in action on the Somme on 30 July 1916, aged 19, serving as a Private in the 6th Battalion of the Black Watch (Royal Highlanders). Another brother William Henry survived; he served in the Royal Army Veterinary Corps before being transferred as a Gunner to the 6th Reserve Brigade of the Royal Field Artillery.

Barnsley Chronicle provides a lot of details in articles, letters and adverts from 1914 to 1919:

12 December 1914 – The second patriotic concert … was very successful. The chief attraction was the fact that Madame Amy Joyner, ARAM, was announced to sing and she received a very hearty appreciation of her beautiful rendering of three songs …

26 May 1917 – The Matron of Lund Wood Hospital wrote: “I have this morning received a cheque from Madame Joyner for the handsome sum of £7, part proceeds of a concert given by her choir, a token of their great sympathies for our sick and wounded heroes. In addition to this magnificent gift our lads were the partakers of a sumptuous tea and supper and were delightfully entertained by Madame Joyner and her choir a few weeks ago ….

4 August 1917 – “I know you will be pleased to know I have been fortunate in coming across a few of our own Barnsley boys out here” writes Madame Amy Joyner from France . “I cannot describe to you what it is like to be singing out here to the boys who are fighting to keep us safe in England. If you could hear the shout when I am announced and see even caps thrown up with intense delight; if you could see their faces light up with pleasure – but more than all if you could feel the hard strong grip of a hand thrust into yours as you pass through on your way to another camp – you would never forget it. One boy said to me “You cannot understand, Madame, what it has meant to us to see you, hear you and really speak with you”. I looked at his war-worn face and my heart simply went out to him and all of our brave boys…

“I am having a very busy and harassing time and it is really a great strain but I am becoming daily more thankful and pleased that I stuck to my promise and came. I shall have a large diary and some wonderful scenes to describe; words cannot express them I am afraid. We are in the heart of things and can hear the constant thud of guns.

“I have sung already to thousands and thousands of men, been miles out in a huge dark forest to camps where boys are resting from the line and where you would never think there was a living creature. Little do we know in England what these boys are enduring and their wonderful spirit! We take “Little Peter” with us (a small closed up piano) and we sometimes sing outside in a valley. The boys sat up the hill all around and we have an impromptu platform which wobbles about very ungraciously; always a camp dog and sometimes hundreds of frogs leaping about. I used to be afraid but I am now quite brave and don’t mind the frogs at all. We travel about in a car that was a car once upon a time and we are often delayed on our way home when it refuses to go. We give three shows a day most days and we go anything from 10 to 40 miles out. We oftener than not dine at the Mess and arrive back about 2 or 3 o’ clock in the morning and needless to say our mornings are spend in rest. I could write you pages of all I have done but that must be kept for another time. I am the only one from the North in this party except the entertainer who is a Lancashire man. The others are London artistes”.

9 March 1918 – Lieutenant-Colonel J Hewitt presided at Amy ‘s latest fundraising venture and the programme included her “ever popular rendition of “Annie Laurie” plus her account of her experiences performing at the front. Lt-Col Hewitt asked the gathering to consider the situation of the lads at the front: “At that very moment those gallant soldiers might be standing starved, war-worn and hungry looking across “No Man’s Land” where perhaps death was awaiting them …. How these songs (of Amy and musical colleagues) rendered so sweetly on the battlefield must touch the hearts of lads just as water to the lips of men in the thirsty desert!”. 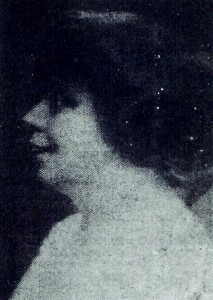 Amy explained that despite some insinuations, she was not making money from these concerts but doing them “to raise funds for the providing of musical treats for the soldiers”. “I have the boys’ interests at heart and I am doing this work absolutely for the love of it”.

Amy Amelia Jarman (Madame Joyner) was an invalid for some time before she died at home at Kirk Haven, Cawthorne, on 18 February 1940, aged 59. Her husband was Juvenile Employment Officer for Barnsley and a member of the Cawthorne Choral Society. The funeral service was held at All Saints Church in Cawthorne with lots of music and many floral tributes.

I am surprised and disappointed that with the number of references to Madame Joyner in the local newspapers I have not been able to find any good quality photographs of her. If anyone has one that they are willing to email to me I would be extremely grateful and would not use  without prior consent.