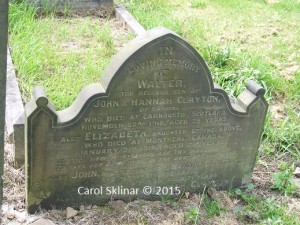 The Clayton family seemed to have liked to travel and it is families like this that can cause a little bit of uncertainty in people like us.  The more common a surname, the more difficult it is to confirm if someone found out of area is the one you are on a mission to find.  People with more unusual names have less confusion and uncertainty with relatives who ventured far and wide.

One family who ventured are remembered on a small but fully carved headstone which reads:-

In Loving Memory of Walter the beloved son of John & Hannah Clayton of Sandal who died at Carnoustie, Scotland, November 22nd 1918, aged 29 years.  Also Elizabeth, daughter of the above who died at Montreal, Canada, January 31st 1916, aged 29 years. O God, how mysterious are they ways to take our dear ones, in the best of their days. Also John, beloved husband of Hannah Clayton and father of the above, who died July 9th 1930, aged 71 years also the above named Hannah Clayton, who died February 15th 1940 aged 82 years.

Not only were John and Hannah’s children away from home when they died but they were both 29 years of age.

In 1891, John and Hannah were living in Great Oakley, Northamptonshire with their family: John H aged 11; William aged 9; Alice M aged 7; Elizabeth aged 5 and Walter aged 1.  All the children seemed to be born in Great Oakley.  John was aged 32 and working as a Railway Signalman.

By 1901, the family were living at St Catherine Street, Sandal and Walter had two younger siblings – Edith aged 9 and George E just four.  Edith like her older siblings had been born in Great Oakley, but George was born in Sandal, Wakefield. John, was still employed as a signalman.  Many of the other men living on St Catherine Street also worked for the railway.

It seems that this family just keeps on growing as by 1911, Earnest Clayton aged 15 days old is the newest addition to the family.  John H, William and Alice are no longer at home, just  leaving five children to look after, which must be something of a task for 53 year old Hannah. John and Hannah had been married for 35 years and between then had raised seven of their eight children. John was now working as a Railway Shunter and Walter was working as an Engine Fitter.

With Walter and Elizabeth being at home in 1911 when did they go away.  Walter worked as an engine fitter in 1911. The column next to the one describing his occupation the word AWAY has been struck through and Engineering Works added – could this be a clue as to why Walter was in Carnoustie?  Elizabeth on the other hand is classed as a domestic servant.   Did she move to Canada as an employee or did she marry and move across the Atlantic with her husband? Your guess is as good as mine………………