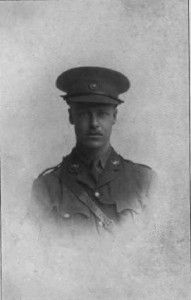 A bereaved mother has received the following sympathetic letter from Captain A C Chadwick concerning the death of her brave son :-

“Dear Mrs Sugden, – it is with the deepest possible regret that I write to convey to you the sympathy of the whole of B Company in the sad loss which you have had to bear by poor Chris’ death. In him I have lost a true and staunch friend, a fine and fearless soldier, who was loved and adored by every man in the company. He could not have had a better or more peaceful end. At the time he, along with 12 other men of his platoon, were holding a ruined farm building which had been retaken, by the company the previous night. Having made certain by fortifying the place that it would not be retaken, he laid himself down to catch a moment’s rest. He must just have dozed off when he, along with Pte. W Smith were struck by a shell. He suffered no pain, death being instantaneous. His resting-place is in a pretty churchyard and is marked by a cross with his name an regiment on it. I promise you, his grave shall be well looked after and everything shall be done to make the spot worthy of the dear fellow who lies peacefully beneath.””

The following is an extract from a letter, dated May 27th from the Adjutant of the Battalion (Captain H S Kaye) to his wife:-

“Poor Suggie – he was a splendid boy, as plucky as anything and as cool as a cucumber. When his company heard he had been killed they were back in the billets after having been relieved, and they were all going back and having it out with the Boches at once. It was with difficulty that they were restrained. They have been sharpening their bayonets ever since. It was a peaceful end anyway, as he was asleep when the shell got him. He was buried in the cemetery where all our fellows have been buried.”

Could you ask for a more wonderful tribute to your son?  Saddened by the loss but  glad in the knowledge that he was thought so much of by his fellow men.

Who was Chris or Suggie? Mrs Sugden’s came as a by chance, while researching for another project, with a few lines at the beginning and at the end missing.  But hey ho, the gist is there.

In 1901 the first census that Christopher could be included in, his family were living at 3 Regent Square, Doncaster. Thomas was aged 40 and employed as Solicitor, Town Clerk and Borough Coroner. As well as the family, the household included two servants, a cook and a nurse.

By the 1911 census, Thomas and his family were living at St John’s Lodge, Wakefield- quite a large house in the Georgian square, having 12 rooms.  Thomas now was employed as a solicitor and Registrar of Deeds, just around the corner from home. By now Edith was 19, Christopher 18 and Constance 14, all still being classed as scholars.  One question arose from this census – where was a young man of Christopher’s upbringing educated?  Two choices sprung to mind. But it seems my first choice was correct.  I have copies of the Old Savilians and a quick look through the copy for the summer of 1915 came up trumps!

The Queen Elizabeth Grammar School or Quegs as it is known locally.  Christopher was a prominent member of the VI form and a prefect.  He was much respected by scholars and staff – we know that he was popular from the letter to his mother.  In 1912 he left school and went to Merton College, Oxford, where he joined the University OTC.  Soon after war was declared Christopher took a commission as a 2nd Lieutenant in the King’s Own Yorkshire Light Infantry.

The Old Savilian goes on to tell much that is already known from the above letter, but does go on to tell more about the young man himself.  An extract from the Old Savilian for 1915 tells “His nature was marked by instinctive dignity and modest reserve. To his many friends he was known as a man of flawless honour, a gentleman by soul as well as manner, and of deep religious feeling.  For music, literature and art he had a fine natural taste, and his promise of distinguished personality was already passing into fact.  All his soldier comrades bear testimony to his knightly character, and deplore his loss.  Of none can it be said more truly that his short life and early death made one perfect peace”

Deep in a longed-for sleep let them carry me into the woodland,
Leave me to rest there alone in silence—alone and in silence!
Deep in a fragrant grove of yew and cypress and cedar,
Knowing no anxious cares nor fears for a doubtful tomorrow,
Lost, in a dreamless slumber, till God in His own good season,
Out of His heaven above, to His blessed Presence shall call me !

Lieutenant Christopher Babington Sugden was the first Old Savilian to be a casualty of war. 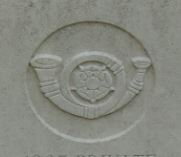 Military records for Christopher – his medal card is full of information. The usual details: name, rank, date of death plus his father’s address (which is already known). There is also a note telling that Mr Sugden applies for the 1914-15 Star in respect of his late son, dated 26 June 1919.

Christopher, of St John’s Lodge, Wakefield died on the 25th of May 1915.  Probate for him was proven in London on the 24th of July of the same year, when his father Thomas Babington Sugden, Registrar of Deeds was to be his beneficiary, receiving £226 13s 5d. 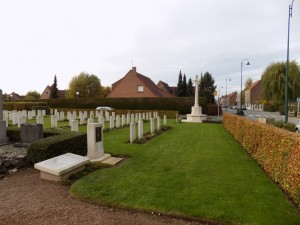 Christopher rests in peace with over 120 other casualties of war in Bois-Grenier Communal Cemetery, just a few kilometers south of Armentieres.