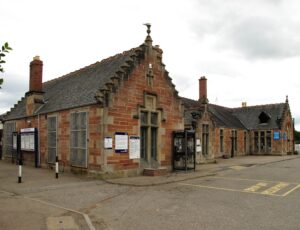 Patrick was born the middle child of five born between 1886 and 1895.  Patrick and his siblings had each been given a middle name that connected them to their forebears, on both the maternal and paternal lines.

The small village of Edinkillie had been home to the Riach’s until about 1894. Patrick and his elder sibling were all from the village while the two youngest were born in Muir of Ord, Dingwall.

Edinkillie to Dingwall via Google maps

The time of the 1911 census came and the family were still living at Station House. Patrick was now 19 years old and working as a Post Office clerk.

In the centre of the square is a small grassy area which is surrounded by wrought iron railings and within its centre is the local war memorial with a rustic wooden cross at the top which remembers the fallen from the 4th Btn Seaforth Highlanders.

In 1917, while James Alexander Riach was working at Dingwall Station he would have seen the ‘Jellico Express’.

What was the ‘Jellico Express‘? I hear you saying!

In May 1917, while Patrick Scott served his Country, his home town played a great part in the war. A rail route had been introduced from London to Thurso – the nearest station to Scapa Flow in Orkney where the Grand Fleet was stationed. It was Britain’s longest railway journey, just over 700 miles, and is said to have transported about 500,000 military personnel and mail in two years. The train’s carriages could hold up to about 500 for the long, 22-hour journey. The journey was the safer option, and quicker than by sea – it was also safer than the sea with the constant threat of U-boats.

The railway station cafe was also a very busy place and is said to have served over 134,800 cups of tea – served during the entire war by Red Cross volunteers.

Patrick’s Post Office record has him working from 1908 to 1915. By the time April 1918 had arrived Patrick Scott Riach was serving with the Royal Flying Corps, later the Royal Air Force. He served in France and by October 1918 he was in Russia. In June 1919 his records tell that he was in Archangel. He was a wireless operator and had completed numerous courses in this field. He had experience and qualified as a telegraphist. He had knowledge of telegraphic engineering and held a Class 1 Postmaster Generals Certificate for Wireless and attended courses in Valve Detectors at Brooklands and British School of Telegraphy, London. During his time serving his country, he had been given the rank of Lieutenant. It was while in Archangel that he was Acting Captain. He was transferred to the ‘unemployed’ list. 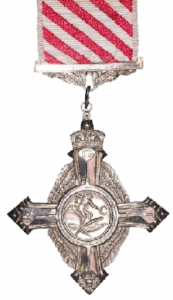 Upon return to civilian life, he returned to working for the post office. In 1922 he married Christina Laurie Hood. Christine had also worked for the post office – could they have met through work? The couple went on to have at least two children.

Patrick retired from the post office and lived the rest of his days in Dingwall.

He died on the 16th of October 1958. He rests in Mitchell Hill Cemetery, Dingwall.