It was Eton College that gave me the WW1 bug and one friend in particular imparts me with newspaper cuttings and snippets.  One such newspaper cutting was given to me a few days ago and again has an Eton College link. It is a known fact that many of the young men from Eton College and other Public Schools left school in the spring and summer and by the autumn and winter had joined the the ranks of ‘the fallen’.  One in five young men from these schools did not return. Information from a new book tells that King Edward School, Lytham was the hardest hit public school with a third of ex-pupils who went to war being killed.  The National Archives has a graph detailing six public schools, the numbers serving, numbers killed and a percentage.  Eton College had 5650 young men serving with over 1100 being killed.  While Sedbergh had 1250 serving with losses of 251.  Eton in this graph seemed to come off the worst.  But saying that Eton seemed to fair very well when it came to The Old Etonians being awarded the Victoria Cross followed close by Harrow. Anyway, back to my newspaper article that features Eton’s first viii rowing team for 1913. Namely, Lindsay Campbell ; Charles Rowlatt ; Sigurd MacCulloch ; Ronald Backus ; Augustus Dilberoglue ; Richard Buckley ; Ian Napier ; Stephen Fairbairn ; Edmond Elliott. Only three of the first viii team for 1913 died in The Great War, firstly – 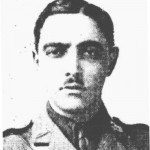 Augustus Dilberoglue – he was born on 13th January 1894, he was the son of Planton and Julia Dilberoglue who around the time of their sons death were living at The Lodge, 19 Southfields Road, Eastbourne.  The family had previously been living in Cairo as Planton had been a Judge of the Native Court of Appeal.  He was educated at Summerfields, Eton and Christ Church, Oxford, where he was when war broke out.  He obtained a commission and later attended Sandhurst.  1915 saw him being gazetted to the 3rd King’s Own Hussars.  Augustus served with his regiment in Shorncliffe, Ireland, with the BEF in France and Flanders and was KIA on 1 April 1918 nr Domart.  He rests in Hourges Orchard Cemetery Domart-Sur-La-Luce CWGC cemetery. His Commanding Officer wrote that he had a very high opinion of him, he was a fine young man and would be a great loss.  A fellow officer said he was of the finest character and a good friend.  He went on to say that he did not think he had ever met a more morally fearless character and that his squadron and troop fellow officers all loved him. While at Eton he had been captain of his house and in his last year captain of boars.  He rowed bow in the vii in 1912 and no 5 in the vii in 1913.  During that year he also won the School Pulling with G W Withington.  In 1914 he rowed no 7 in the Christ Church boat First Torpids.  He was a member of the Cavalry Club, the Vikings Club and of the Leander Club. 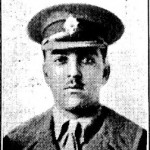 Planton and Julia lost another of their sons – Richard Nicholas Dilberoglue who was also educated at Southfield and Eton and Sandhurst and joined the Coldstream Guards.  He was KIA when a shell exploded at his feet and he rests in Ginchy.  He also had wonderful tributes paid to him. Richard’s medal card, like his brother’s give their parents address in Eastbourne, but Richards gives a previous address of Buckingham Gate SW1. Richard and Augustus also had another brother serving in the Welsh Guards, Pandeli Dilberoglue who survived The Great War and lived until 1952.

Sigurd MacCulloch (MacCullock) – Sigurd Harold MacCulloch was the son of John J and Matilda J MacCullochserved as a 2/Lieutenant  in the Seaforth Highlanders and died of wounds near Albert in 20 December 1915 aged 21.  He rests in Mailly-Maillet Communal Cemetery Extension.  An address on his medal card tells that the family lived at 8 Caurtfield Gardens, SW7.  The London Gazette for 4 March 1915 states that “The undermentioned Second Lieutenants to be Lieutenants” Sigurd H Macculloch’s entry had a note in brackets ‘(since died of wounds received in action)’. Sources:-De Ruvigny’s Roll of Honour Ancestry CWGC Christ Church, Oxford.

Esmond Elliot –  Was born on 25 September 1895, to Gilbert John Elliot-Murray-Kynynmound, Earl of Minto and his wife Mary Caroline Grey.  Esmond like the other young men in this entry he attended Eton College and was coxwain in the Eton College eight in 1911,12,13.  During the Coronatian year he was Page of Honour when the new King and Queen went to Holyrood.  He served in the Scots’ Guards with a rank of Lieutenant and acted as A.D,C, to the Major General commanding the Guards Division in France.  He Died of Wounds on 6 Aug 1917.  A note on his Medal Card dated 7 February 1922 has his mother, The Rt. Hon. Mary, Countess of Minto, of 48 Chelsea Park Gardens,  SW3, applying for her dead sons medals.on year, he was Page of Honour when the King and Queen  were at Holyrood.