Just before Easter I spent a weekend with my daughter and her boyfriend.  The weekend started with my driving down to Ealing, meeting my daughter and visiting one of her friends and her new little one.  Then a drive to Basingstoke.

Saturday started with a yummy breakfast and then onto Winchester, lunch in Raymond le Blanc’s, a visit to the Cathedral (memorials to follow very soon ) and finally an interesting visit to see The Round Table.

So Sunday arrived and a visit to Odiham and lunch, but before lunch I was given a short tour of Odiham, including, yes, the war memorial and the church – nice village and nice company. Oh! by the way the church has a beautiful window relating to the local RAF station.  I’m not a great lover of modern stain glass but that was nice.  But, to my surprise it wasn’t even a window, but a very good deception – a light box, but it still looked impressive. 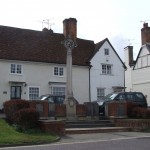 Now to the village memorial to those who have fought and died in two world wars.

Who is mentioned on the memorial to the men and women of the Parish of Odiham ?  Geoffrey Harris Gotelee, the son of Arthur and Esther of The Old House.  Geoffrey in 1911 was a boarder at St Albans School, his parents at this time ran the Post Office.  Richard Elkanah Hownam Healy, the son of Randolph and Alice of Hownam Lodge.  1911 sees Richard living in Kensington Hall Gardens and working as a Reporter for a Daily Paper.  He is later mentioned in the London Gazette when he received his promotion.

Another young man from the area was Arthur Henry Pither, son of Stephan and Sophia.  Arthur worked in Quebec, arriving in 1908, but was back in the area by 1911.  He did however, enlist in the Canadian Army and from that we can get a fleeting glimse of what he looked like.

Guy Lutley Sclater, brother, son and husband. He served as a ~Captain in the Royal Navy and rests in Odiham Churchyard.

Now, W G Wooldridge, he was a little bit of a problem and has not been identified by others who have transcribed Odiham Memorial, but I think family history helps a great deal when transcribing and knowing people make errors and what type of error could occur – well, I found him – so visit the transcription and see who he is and where he rests.  In fact, if I had completed the transcription last week, I would have known where he was and could have visited, as I was only a matter of minutes away from him.

The last young man I am going to mention in this taster is Reginald James Moody, son of Charles and Ellen.  He served in the RFC and died on 4 March 1917 while flying with 2nd Lieut., Eric Edmund Horn.  Edmund had enlisted on his 17th birthday and died on his 19th, so, so young and very brave.  They both rest in the same cemetery.

There are still a few young men whose information needs adding to the transcription and they will be finished shortly, as will the WW2 transcript.

The other weekend I went to visit my daughter in Ealing.  After a trouble free drive down I  arrived in Ealing and met Kim.  She had arranged for us to visit one of her friends who has just had a baby, she’s gorgeous by the way – the baby not the friend and whats even better, only a short walk away, but we  did divert to Pitshanger.  Pitshanger although minutes from Hanger Lane has a village/small town feel about it.  One of the best things is a charity shop and Kim seemed to gravitate towards it, which is good as she has a special fundraising programme for this year.  Inside was the most fantastic 196o’s style coat, bright yellow and black with circle pockets and very reasonable – an early Easter pressie and looks wonderful on.

Anyway, after a visit to the new mum, dad and little one we walked into Ealing, Kim gathered her bags and off we set for Basingstoke.  The motorway should have been reasonably quiet by that time but no, there had been a few accidents and there were miles of ‘rubber neckers’.  We arrived, parked the car outside Kim’s boyfriends house and did none other than went to the pub – drink and food in that order. 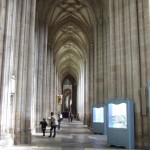 Saturday we had a wonderful walk around Winchester, had lunch in Raymond Blanc’s on the Broadway, Winchester and then spent a wonderful time in the Cathedral.  Now that was eventful! There must have been a concert on very soon as there was a full orchestra and choir having a rehersal and the sound found every corner of that magnificent building.  And the sun shone through all of the glorious windows making wonderful shadows across the stone floors.

Well, I take it you know me by now and you have guessed there were war memorials galore – even Kim and Mark found some wonderful things to immortalise on a ‘chip’.

I think the cherry on the cake was a war memorial to one of my distant relatives – Guy Victor Baring, closely followed by a memorial to a young man who attended Eton College. It was transcribing Eton College that started my collection of memorials and look where that has got me !!

On the way back to the car we stopped of at Winchester Great Hall to see The Round Table. 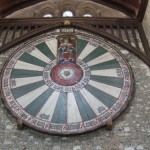 Back in Basingstoke, Mark cooked a meal for us and then we settled down to wine and Scrabble – I won !

Sunday morning we packed up and set off for Odiham – Mark’s parents house, where he cooked Sunday lunch and Kim made vanilla custard tartlets.  Before our meal I was given a wonderful tour of the village including the village war memorial, the church and the pest house.  The church has a wonderful modern window with an RAF theme.  The fact is the window is no more than an illuminated box, but for a modern ‘window’ is wonderful in its simplicity.   Thank you Margaret for the tour and hospitality.

My wonderful weekend was over and it was time to head back ‘up North’ and start transcribing the new additions to my collection.