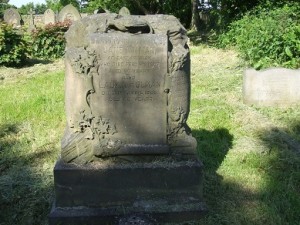 A friend posted a picture on Facebook of the back of a  headstone from the village churchyard.  The only part visible in the image was the unusual back, making the headstone quite unique.

A walk up to the churchyard on a very nice Thursday morning brought me face to face, well face to stone, with the real thing.  From the back it looks like something you might see on Ilkley Moor – stones piled up in a random fashion.  But does the monument mean something more?

First mentioned is ‘Jane Holman of East Ardsley, who died Feby 2nd 1907, aged 56 years‘.  Jane Holman, was born Jane in 1851, the daughter of William Haley and Hannah Walker.  Jane was born in North Brierley, but gave her place of birth as Oakenshaw and in 1881 was living with her family on Green Lane, Cleckheaton, working as a cotton and worsted weaver.

On the 9th of August 1876, Jane Haley went to The Parish Church in Bradford with her family and friends and married Horace Holman, born in Norfolk. Jane was now 24 and gave her residence as Oakenshaw, Low Moor, while Horace was 21 years old, employed as a carrier and also from Oakenshaw, Low Moor.  Horace, was the son of Charles Holman (deceased), a cattle dealer.  The marriage, after banns, was performed by Henry Prosser, B.A., and both Horace and Jane signed their names, as did their witnesses  G J Sewell and Emma Holman – Emma’s signature being quite naive.

By 1901 Horace and Jane were established in East Ardsley, living at Allinsons Buildings, with five children living at home. Horace was aged 45, a farmer, working on his ‘own account’ and a carting agent.  His sons also worked on the farm. 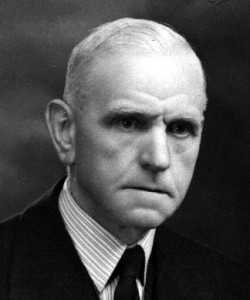 The inscription following that of Jane says ‘Also, Laban Holman, died 1st April 1966, aged 88 years’. As Laban was Jane’s son quite of a few of the census entries cross.  In 1881 Laban was with his family, he was four years old, being born on 2nd of April 1877 at Bottoms, Wyke and baptised on 20th May 1877 at the Wesleyan Methodist, Oakenshaw.

1891, Laban is living and working at Low Street Farm, in the Civil Parish of West Ardsley – he is a farm servant working for William Scott.  We know from his mother Jane’s entry,  that by 1901 the family were living and working in East Ardsley on the family farm and carting business.  Within six years of the 1901 census, we know that Jane had died.  Her will, proven in Wakefield, left all her business dealings to ‘my son Laban Holman for his own use absolutely in return for the good work he has done for me in managing the business and keeping myself and younger children thereout now for many years.’  Jane also left ‘all those Policies of Insurance on my life in the Prudential Insurance Office together with the household furniture and any money that may be in the house at the time of my death and the residue of my estate to my Trustees upon trust to sell, call in and collect the same and pay my debts, funeral expenses and the costs of proving this my will thereout so doing to pay and divide the same amongst all my children inclusive of the said Laban Holman, share and share alike.’…….what happened to Horace?  Probate to Jane, wife of Horace Holman, granted on 21st March to Laban Holman and Charles William Holman, electrical engineer, effect £189 6s. 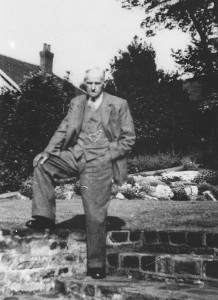 In 1910 there are Tax Valuations showing that Laban had access to various plots of land in East Ardsley and Thorpe  – some he rented from the Great Northern Railway, others he owned and sub-let.

Ten years later, in 1911 Laban is living with his sister Mary, her husband George Harper and their children, at 12 Allinsons Buildings, East Ardsley. Laban is a carting agent, his brother in law, George is employed as a teamster –  is he working for Laban?  The early 1920’s saw Laban, in directories as a haulage contractor working out of Thorpe with the telephone number of Rothwell 6. 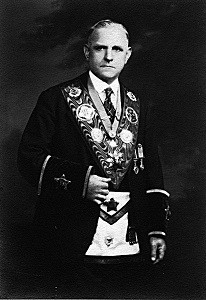 Another section of the memorial mentions ‘Francis Holman who died on 3rd of August 1903, aged 23 years’. Francis is living with his parents at Allinsons Buildings, East Ardsley in 1891 – so the family were in East Ardsley while Laban was living and working on the farm in West Ardsley. Horace gave his occupation as colliery labourer.  Francis can also be found on the census as Frank.  Also, on a section of the memorial ‘also of Edgar Holman, who died Septr 2nd 1889 aged 1 year ad 8 months , interred at Westfield Chapel, Wyke’.

But. what happened to Horace?   The 1911 census has an entry for a Horace Holman, carter, living at 19 Queen Square, Leeds, with his wife Clara…..could this be Jane’s Horace, who married Clara Hudson in the September quarter of 1907 in the York Registration District?  Could Horace have left the family home after the 1901 census.  That could be the reason why Jane left the business to Laban.   Anyway, there is a death for a Horace Holman in the Leeds area in the June quarter of 1923. 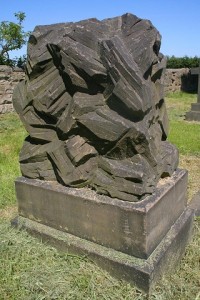 The headstone, some say the stonework resembles blocks of coal, or could it be stone.  Coal from the local mines or stone from local quarries that the business transported ………..you make your own mind up!

Thanks to Alistair Kennedy for allowing me to use his images, he also tells me that other members of the family have interesting stories to tell!